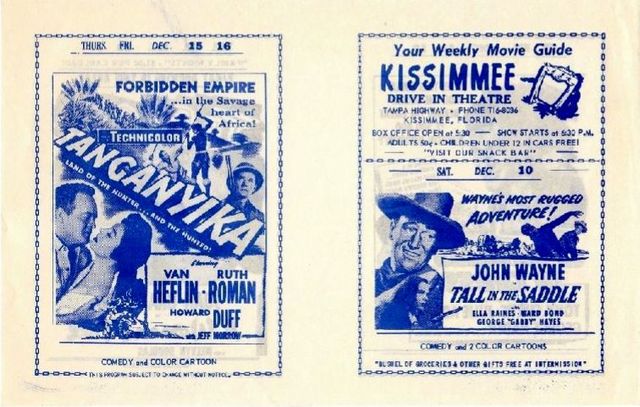 The Kissimmee Drive-In was located south of town on the Orange Blossom Trail. It was opened on February 11, 1953 with Dan Duryea in Hal Jennings of Oklahoma". It had a capacity for 400 cars. It was closed in late-January 1962.

The property is now occupied by a strip mall.

Andy, It parked 350 cars in the late fifties and was owned by H.G.Ventry.

Some vandal has shot out the middle letters in the sign for the Kissimmee Drive-in theatre, so it now reads “Kiss Mee” – which apparently doesn’t hurt business very much or there would be rapid repairs made.

When did it close? Being near Disneyworld, did it screen any Disney movies?

Boxoffice, Sept. 8, 1956: “The new owners of the Kissimmee Drive-In, Dewey P. Clayton and Neal C. Nesbit, are making a number of improvements to the 400-car theatre. Additional playground equipment and CinemaScope equipment will be installed. The new owners were formerly with the Hercules Power Co. in Cumberland, Md., and decided to bring their families to Florida and settle here.”

The Kissimmee Drive-In Closed In Late January 1962, Exactly 5 Years Prior To The Idea And Construction Of Disney World, Which Construction Began During The First Week Of February 1967. It Took 4 Years To Construct And Disney World Opened Its Magical Doors On October 1, 1971.

A Tijuana Flats Mexican restaurant now sits at this location.