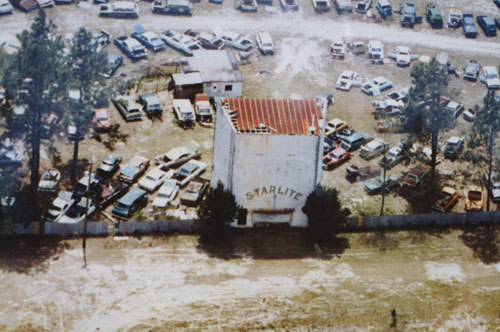 Opened prior to 1953, the Starlite Drive-In was located west of town on a side street off of US 90. It appears that this one has been closed for a long time, as the site has been entirely reclaimed by woodland. One can still see the outline of the property, but it is unlikely that one could tell that this was a drive-in without having prior knowledge. There might be some remnants in the woods, but it is impossible to tell from aerial photographs.

I found it listed as being on Gary Carter Road, but I can’t find that road in Chipley???

I uploaded the aerial photo from 1966 here.

I live about eight miles from the property and used to go to that theater as a kid. The theater closed in the late ‘70s then became a junkyard. The property has NOT “been entirely reclaimed by woodland”; whoever stated that is looking at the wrong area on Google Earth.

It was not “on a side street off US 90,” it was about 1.5 miles west of town on US 90 just before Chance Road (which is a county dirt road). I suspect the Chance Road address might have been the mailing address, but the drive-in entrance was directly on US 90.

The photo above of the back of the bigscreen looks like it is from the early ‘80s at which time the property had become a junkyard. The junkyard has since been cleared out. The “STARLITE” sign faced US 90.

Boxoffice, Oct. 10, 1953: “CHIPLEY, FLA. - Hurricane "Florence,” which hit the northwestern Florida section recently, destroyed the screen tower of the Starlight Drive-In here. I. Roche, owner of the drive-in, started building a new concrete block tower in the shape of a pyramid. Estimated damage to the tower was about $1,500. Another $250 damage was done to the blinds. This was the second time this year that the screen had been damaged by storms."