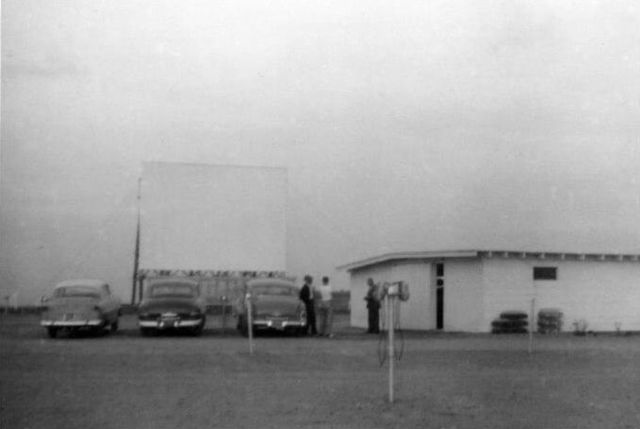 The Cadiz Drive-In was located on US 250 south of town. It was opened on July 13, 1950, featuring “Without Reservations” starring Claudette Colbert and John Wayne. It had a parking ramp that held 300 cars, and Tallmadge Wilson was the theatre manager. Ross Compher and Chester Hall were the owners. In 1963 it was sold to new owners. Co-Operative Theatres of Ohio was the booking and buying agency. The Cadiz Drive-In was closed at the end of 1984

It was reopened in 1986 as the Gabletown Drive-In and closed in 1987. The site is now used as an auto-parts yard.

There are pictures of what once remained of this drive-in on its page at Drive-ins.com: http://www.drive-ins.com/gallery/ohtcadi. Apparently it was also known as the Cadiz Drive-in.

Go to the Map and see all of the autos waiting for the movie to start!

It was called the Cadiz Drive-in Theatre in 1956 parking 300 cars and at that time owned by Corp.Theatre Service Corp.

There is no mention of the “uptown” theatre that once was..it was certainly there for many years, including the first run of Gone With The Wind…I was able to catch it there in the early 60’s on re-run…it was gutted to become a storage area and indoor parking lot in the late 70’s. Originally part of the Custer Hotel complex in Cadiz.
The Cadiz Drive In Theatre was a gas,I remember it, but of course it was only operational during favorable weather(not the snow season)

One thing to add is that it reopened in 1986 as the Gabletown Drive-In and closed in 1987 for good.