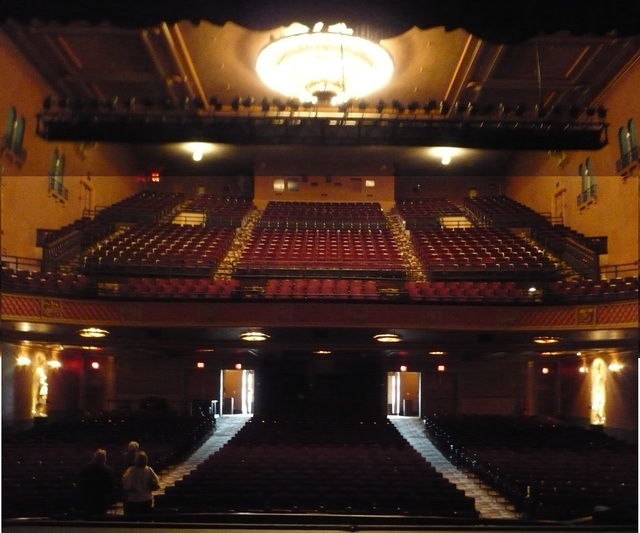 The Jefferson Theatre was one of the few Weil designs where he did not incorporate the letter "S" for the circuit into the exterior and interior design, though the theatre was no less ornate than the rest of the Saenger’s mid-sized houses of the 1920’s.

The Jefferson Theatre contained a 3 manual, 8 rank Robert Morton organ, opened by organist Alice Richland (which has since been lovingly restored to its original condition).

After decades as the city’s premier movie house, the Jefferson Theatre declined in popularity, and was eventually shuttered. However, beginning in the early-1990’s, a campaign to restore the theatre was kicked off, and has been underway ever since.

Restoration was completed in 2005, and the Jefferson Theatre is currently home to both community theatre and other live stage performances.

You can see a beautiful print at this link:
http://randywelborn.com/007.shtml

Another print – this time of the interior with children at a talent show (may be slow to load):
http://randywelborn.com/003.shtml

In 1937, Jefferson Amusements owned the Rio Theater in Beaumont. I’m not sure if this was a predecessor of the Jefferson or a separate theater.

This was the theater where KTRM Radio DJ Jape “The Big Bopper” Richardson set the record for on-air DJing: 122 hours and 8 minutes, playing a total of 1,821 records! That was in May 1957; the following year, he struck gold with a little ditty he wrote and recorded called “Chantilly Lace”.

The Jefferson Theatre has a new website: www.beaumont-tx-complex.com/jeffersontheatre.html Apparently the Jefferson is now part of the Beaumont Civic Center Complex, which consists of several buildings.

Pictures of the interior… View link

Excellent photos of the grand re-opening in 2003. http://www.savetheorgan.org/jefferson/index.htm

Lots of childhood memories associate with the Jefferson. Loved looking at the chandelier and statues. Favorite movie experience was “House on Haunted Hill” which I also saw at the Temple in Meridian, Mississippi. Ten year old boys and a horror movie; doesn’t get better than that!