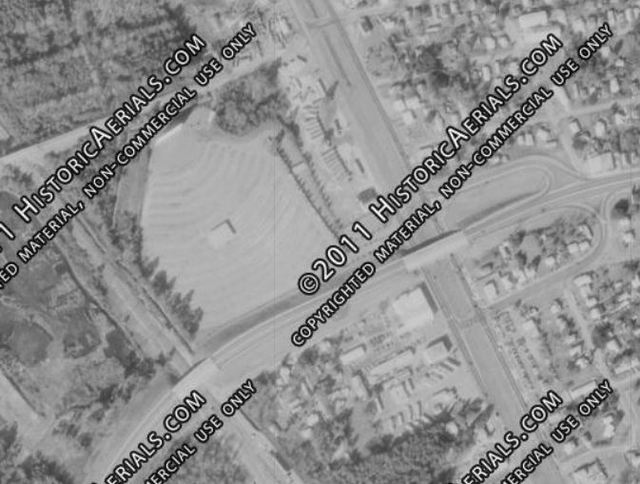 The Victory Downs Drive-In opened May 12, 1945, featuring “Guadalcanal Diary” with Preston Foster, Lloyd Nolan, William Bendix, Richard Conte and Anthony Quinn. The drive-in was located on the old Victory Downs Jockey Club Race Track. The drive-in closed on December 1, 1947, for remodeling and reopened on March 15, 1948. Soon after the reopening, the drive-in was sold to Consolidated Theatres Inc. and closed again on December 31, 1948. The drive-in was remodeled to include a 500 car capacity parking ramp. The newly remodeled facility featured a new 60 ft high x 30 ft wide screen tower manufactured by the Bulcraft Corporation. It had all new restrooms, concession stand and in-a-car speakers. H.M. Gibbs of Consolidated Theatres supervised the reconstruction of the drive-in.

The drive-in reopened on September 7, 1949 as the North 52 Drive-In, featuring “My Dream is Yours” with Jack Carson, Doris Day and Lee Bowman. In 1962, with the construction of the new I-26 expressway and East Montague Street being extended so it would connect up with the new I-26 expressway, the drive-in lost some of its road frontage. On October 6, 1961, the drive-in closed again for another reconstruction. This time, a new 72 ft high x 122 ft wide screen tower was relocated on the north end of the parking ramp with the screen front facing south. The new parking ramp was increased to park 1,000 cars. New twin box offices at the entrances were constructed to speed up entering the drive-in.

The new concession stand was designed with three self-service lanes and could accommodate 2,300 people in 30 minutes. Also, a big front window was installed so that customers could watch the movie while being served. All new projection equipment was installed. The North 52 Drive-In reopened January 19, 1962, showing “The Second Time Around” with Debbie Reynolds, Steve Forest, Andy Griffith and Juliet Prowse. At this time Consolidated Theatres owned and operated the Flamingo Drive-In and Magnolia Drive-In. Since it was located in South Carolina, which has mild winters, it was open all year long up to its closing. In the mid-1980’s they stated to show “X” Rated movies such as “Driller”, “Princes Seka” and “Looking Good” at $5.00 a car load.

The only drive-in I could find on US 52 was located under the southern portion of Northwoods Mall, from about the southernmost anchor store to where the Hooters and Outback (7643 Rivers Avenue) are located. If this is the same theater, then the city should be changed to North Charleston. This theater was gone by 1989 at the latest.

Andy,I was going by the local paper there in Charleston.You are most likely right.

I remember the freight train that ran behind the screen! LOL

The drive ANdy mentioned was the Gateway. It was demolished in 1979 when Northwoods Mall expanded. While it was still in operation that area was known as Charleston Heights… before North Charleston township incorporated. If you leave that location on Rivers Avenue and drive 5 miles towards downtown Charleston, just as you cross the railroad, the Port drive-in would have been on the left, behind the strip mall (Liberty Mall). Continue on Rivers another 3 miles and the North52 would have been on the right. There was a Rex-All drugstore and Wheeler’s pizzeria next to the entrance for the driveway. My neighbors owned the pizzeria. When we were there, my parents would park our car behind the restaurant, go in to spend time with the Wheelers and brother and I would stay in the car and watch whatever was playing because the entire screen was visible from behind the restaurant. They drive-in speakers were loud enough for us to hear it pretty well too. Back to locations…. about 1 mile further on the left was the location of the Flamingo drive-in. Go another 10 miles, a little beyond where Rivers Ave and Meeting Street converge and you’ll be at the 4-Mile drive-in location. I was born and raised in Charleston and remember very well going to all of them with my family or with dates. My brother and cousin worked at the North 52, Gateway and Terrace theater and probably a few more.