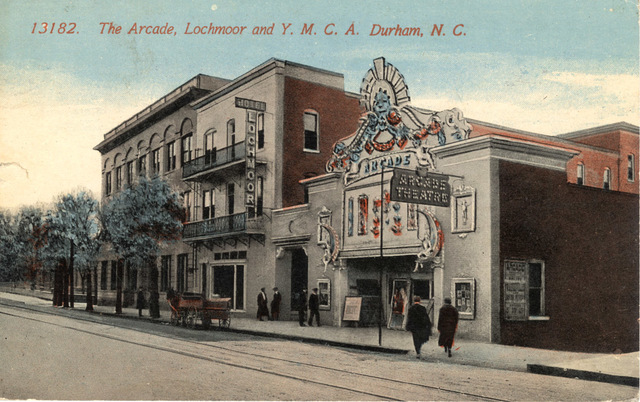 Edward J. Parrish, the first man in Durham to open a tobacco auction warehouse, built an arcade of shops beside the Union Station in 1909, and an adjoining hotel (the Lochmoor) two years later. Located on this site was the Arcade Theatre, a nickelodeon that stayed in business for only a few short years.

Between 1905 and 1914, the nation was swept by ‘nickel madness’ as nickelodeon theaters sprung up in all sorts of converted storefronts. These theaters were often located in working-class neighborhoods, but in Durham they were prominently sited near the train station, hotels, and City Hall. While the exterior of these structures may have been embellished with Art Nouveau style flourishes, the interior would have been sparsely decorated with rows of benches. Orchestras and organists filled the halls with accompanying music and sound effects to heighten the (silent) film-watching experience. Films often lasted less than ten minutes and were rarely exhibited more than a day or two.

Durham had several nickelodeons, including the Edisonia (125 E Main), the Paris (121 E. Main), the Strand (110 E. Main), the Dreamland (112 N. Mangum), and the Electric (211-13 W. Main). None of these structures still stands today, save the Electric, which was housed in the Jourdan building, currently occupied by the Main Street Pharmacy.

After the racially-inflammatory 12-reel “The Birth of a Nation” appeared in 1915, movie-goers preferred to watch feature-length films, not the shorter pictures. Theater owners began offering scheduled showings, reserved seating, improved heating and ventilation, and charged higher admission prices. They paid more attention to drawing in customers by erecting wide canopies and marquees, electrically-lit vertical signs and chaser lights, and a box office right on the sidewalk. The nickelodeons and their nickel-priced tickets gave way to the movie palaces of the 1920’s. The elegant and elaborately-designed Carolina Theatre and the black-owned Regal Theatre are indicative of this change.

Website is more about the history of the YMCA but don’t let that throw you cause it does mention the Arcade Theatre and the 5th photo does show the theatre.

Can always use more info and photos.