Look for my new book to be published by Amazon.com before Christmas: “The Paramount, The Palazzo, and The Passion.” After collecting materials for over 60 years on the theatre and the residence for Robert Wright fashioned from the Paramount’s facade (adapted by my uncle William F. McCall, Jr. FAIA), I have finally put all of this history together in one volume. Many new photographs—never before published—along with new findings should make it a worthwhile read. Also, before Christmas, look for the release of the companion “Twice Told Tales of a Southern Palazzo,” which focuses on the human side of The Palazzo in Moultrie, GA inspired by the Paramount’s limestone facade. This book is an expanded version of the earlier title with several new chapters and additional photographs. 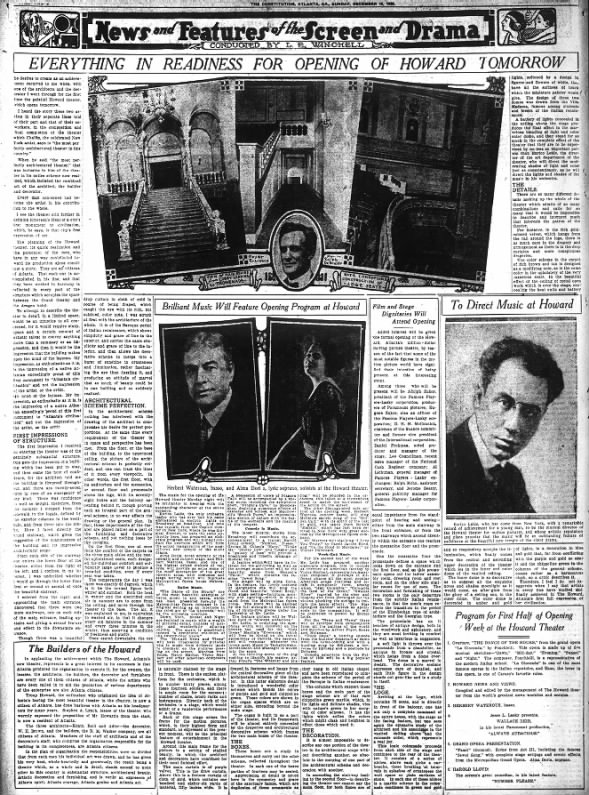 This is in response to the comment made by ljt on December 16, 2010. You mentioned the Howard playing a move named “An Atlanta Romance.” I have a friend who is very interested in those articles that you mentioned and any other information that you might have on the movie. Hopefully you have the auto notification for comments turned on and will get this. If so please respond and I will supply contact information.

Perfectly wonderful! Thanks for sharing! I have a number of happy memories associated with attending the Paramount in the 1950’s! Going to the movies was special in that era. Something about the experience was lost with the decline & fall of the great movie palaces. Going to a multiplex simply does not compare!

My parents, who are long gone now, grew up in Atlanta in the 20’s. There was a sidewalk photographer who set up between the Grand and Paramount and would take candid shots of people as they walked by hoping to sell them the next day. I have pictures of both my mother and father, who did not know each other at the time, walking up the sidewalk with the Grand marquee in the background.

GREAT PHOTO, Stan! Thanks for sharing it! My dad remembered this era. He saw a lot of movies at both the Howard & the Capitol! There aren’t many people alive today who can remember the Atlanta of the 1920’s!

Here is another picture from the great Atlanta Time Machine website. The Howard Theater is on the right and across the street and almost out of sight to the north is the marquee of the Capitol Theater.

This picture has been linked to before on this page but the link no longer works.

Sensational photo! Before my time (I’m a Baby Boomer), but really great! Thanks, Stan!

Great picture from VJ day 1945. On the far right, Loew’s Grand, next to it is the Paramount / Howard, and up Peachtree on the left is the Roxy marquee. Just below the Roxy sign you can just make out the top of the marquee of the Capitol.

Hi, Patti – Since I was just a bit too young to have seen Elvis at the Paramount, I can’t honestly say if he threw a scarf into the crowd at any of the shows in that engagement. In later years, I believe that became a routine part of his shows. Those shows at the Paramount & the Fox in Atlanta must have been enormous fun in those days. Elvis was still fresh and in the process of making his mark. My dad told me about seeing Frank Sinatra at the New York Paramount Theater back in the 1940’s. The bobbie soxers screamed very loud, but there was no doubt that “Frankie” could sing!

Hi Don, My mom attended the concert. After she passed away, I found the ticket stub, paper handout with the songs and order printed on them. I also found a scarf that I once remember her telling me she caught when he threw it to the crowd. Do you happen to remember him throwing a scarf into the crowd?

Thank you so much
Patti

Thank you, Jester, for sharing those great memories!At that time, I was just about to enter the 3rd Grade at East Lake Elementary. Later, I went on to attend Murphy High School for two years, before transferring to another school. So, I knew East Lake and Kirkwood very well. The Paramount and the Fox were my favorite Atlanta theaters. Yes, I remember the Paramount ushers with their flashlights! If memory serves, their jackets were a wine color, like the ushers at the Fox!

For Don K. I attended the Elvis concert at the Paramount. I was in the 10th grade at Murphy High School. Two older girls (sisters) lived next door to my family in East Lake. They invited me to go. I had never heard of Elvis Presley. We sat on about the second row of the balcony, in the center. I was astonished, and befuddled, by all the screaming by every girl in the house. I just couldn’t figure it out, and I could hardly hear. I certainly didn’t think it was merited. The warm-up act was Mother Maybelle and the Carter Sisters, including June Carter (later June Carter Cash), with Mother Maybelle playing her autoharp in its ‘held-high" position.And of course, they played Wildflower Flower. And, indeed, the Jordonaires (a gospel group, actually) were his back-up group. The photo on this cite reminded me that in those days, ushers always escorted patrons to empty seats with a flashlight, and if you were a party of two and there were single seats on a row, the usher would make people bunch up so thee would be two side-by-side seats for a couple.

Interesting photos and ads from this event. Here’s a quote from the site:

“On June 22nd thru the 24th, 1956, Elvis, Scotty, Bill and DJ appeared at the Paramount for ten performances in three days. A blurb on page 34 in the advertising section of the Atlanta Journal-Constitution on the 22nd advertised Elvis' arrival in Atlanta and announced the shows at the Paramount. It also said, "Appearing with him will be a variety show consisting of 16 vocalists, instrumentalists and comedians.”

A review of Friday’s performances appearing on page 6 on the 23rd read, “Elvis Presley rolled into Atlanta Friday, rocked through three performances at the Paramount Theater and had one of his $15 white jersey shirts ripped off by enthusiastic female fans. The rock ‘n’ roll artist received a welcome which he described as "great” upon his arrival in Atlanta from his home town of Memphis. He performed before capacity crowds at all three shows Friday. A majority of the spectators were teen-age girls.“1

“Presley moaned through seven of the most popular rock ‘n’ roll tunes, including "Heartbreak Hotel” and “Blue Suede Shoes,” at each of the Friday shows. He was dressed in a green jacket, black trousers, white jersey shirt, black tie and black and white shoes.“1

“Two guitarists and a drummer accompanied him. Presley wore a guitar around his neck throughout the performance but did not play it. He was preceded by a variety show which included the Jordanaires, a singing group which has made a number of records with him, a comedy routine and other vocalists."1

“Ten policemen were on duty at the performance, but other than the shirt-ripping episode and squeals from the elated female audience, nothing unusual happened. Presley, who always wanted to be a "truck driver,” has been in show business for one and a half years. He has a 1A draft classification and thinks he will probably be drafted in about six months.“1

“Presley is scheduled to do four shows Saturday, three Sunday, and then leave Atlanta for Savannah and another personal appearance."1

If anyone on this site actually attended any of these shows, I wish they’d share their memories with us!

“Tales of a Southern Palazzo” is now in print and available at:

I have just completed the book, “Tales of a Southern Palazzo” which all you Atlanta Paramount disciples might enjoy. The book, to be published by Outskirts Press late spring – early summer, 2011, reads like fiction although it is a loving memoir of a “complex, twisted, and highly fragrant sotry” about Moultrie, Georgia that is basically true! Using a “singularly distinctive mansion that cements all of the Southern waywardness” as a backdrop, “Tales” recounts the hilarious and otentimes unbelieveable events that have occurred during the tenure of three Southern bachelors within and without its Palladian walls. Theatre historians will recall that the “Palazzo” was fashioned from five of the upper facade sections of the Paramaount by my uncle, William Frank McCall, Jr.

In reference to the posting by Mike Rodgers: The Howard Theatre changed names to the Paramount on Sept 1, 1929. The announcement was made in the Atlanta newspapers on August 28, 1929 The first film under the Paramount name was “The Dance of Life” By Nov. of 1928 the Howard had already installed sound equipment opening with Al Jolsons, “The Singing Fool” at the beginning of November followed by the film “Wings” “King of Kings” originally opened at the Atlanta Theatre in 1927. Subsequent showings where at the Rialto and the
“colored” Paramount Theatre on Auburn Avenue. THis Paramount opened in 1924 THis theatre retained its name even after the Howard changed names.

In an earlier posting about some articles I did on the Howard/Paramount for the Atlanta Chapter ATOS newsetters, it was stated that they would only be on that site for a year. Since then these newsletters are available by going to the ATlanta Chapter ATOS and going to previous newsletters. The articles on the Paramount are Oct 2006, and MAy 2007. INcluded are many interior shots of the theatre, and a photo of the facade as it appears in Moultrie Ga.
Enjoy.

Does anyone remember a movie made in Atlanta and shown at The Howard in December 1925 – “An Atlanta Romance”? It was made by Slim Brolund, a filmmaker who went from town to town making films using the townspeople and featuring local businesses. I have newspaper clippings detailing the making of the movie. The leading lady was Miss Pearl Bessent. Would love to know if anyone remembers this.

Nov.5 1928 it was called the PARAMOUNT so that is not 1929 as written above. Playing that date was “KING OF KINGS” that entire week with special scared music.admission was Fifty and thirty-five cents.

J. Neel Reid’s name is currently misspelled as Neil in the architect field above.

I saw Elvis perform at the Paramount in ‘56. I was 8 years old. My mother, in her late 30s, went to
the show – my father was mad as hell about that (he knew Elvis was all about sex!) and insisted on
going along, with me in tow. I don’t remember a variety show, but I do remember the cowboy
movie shown before Elvis took the stage. The audience, young and well mixed, male and female,
kept yelling throughout the movie, “We want Elvis!!” That really annoyed me, as I wanted to see
the cowboy movie. But I did want to see Elvis, too. To me he wasn’t about sex, he was about
blue suede shoes and hound dogs. I couldn’t understand why those girls kept screaming the whole
time Elvis was singing. And I had never seen anyone move like that. I guess no one else had either.
A year or two after Elvis was long gone, I saw “The Creature from the Black Lagoon” at the
Paramount.

Thanks for the comments on one of ATlanta’s Best.

This page has some interior photos of the theater as the Howard as well as some exterior of its era as the Paramount, some of which have been previously posted; it also confirms that Elvis appeared there on three nights, June 22-24, 1956, and that the surviving section of its facade is the front of a home in Moultrie, GA (with a picture): http://www.scottymoore.net/paramount.html