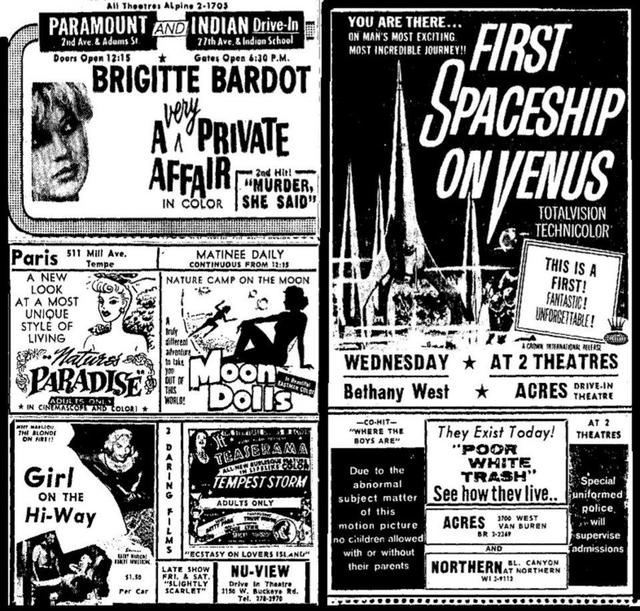 The Indian Drive-In was opened August 27, 1948 with Randolph Scott in “Coroner Creek” & Rita Hayworth in “The Lady From Shanghai”. Car capacity was listed at 1,360 making it one of the larger drive-ins in Phoenix. It was initially operated by Phoenix Drive-In Theatres (part of the Harry L. Nace Theatres chain). Later operated by ABC and later by Plitt Theatres. It was remodeled in 1960 by architect John E. Stephens.

The drive-in closed in the early-1980’s and has since been demolished. Where the drive-in once stood is now the site of the Willow Springs Aprtments.

I remember going to the Indian Drive-in during the 1950’s and early 1960s as a small child. I loved this drive-in the best because it also had a nice playground in front of the big screen that included a large merry-go-round with wooden horses on it. It took a few adults to push it but it must have had some well oiled ball bearing rings on it because it would circle a few times and the horses went up and down before needing to be pushed again. I saw several Walt Disney movies there and also some scary horror movies my Dad and older sister loved watching. I would lay on the roof of the car which felt cool as the dusk came. I remember waking up to see King Kong fighting a dinosaur. I was 4 yrs old and it scared the crap out of me. I miss those great times at the Indian Drive-in!