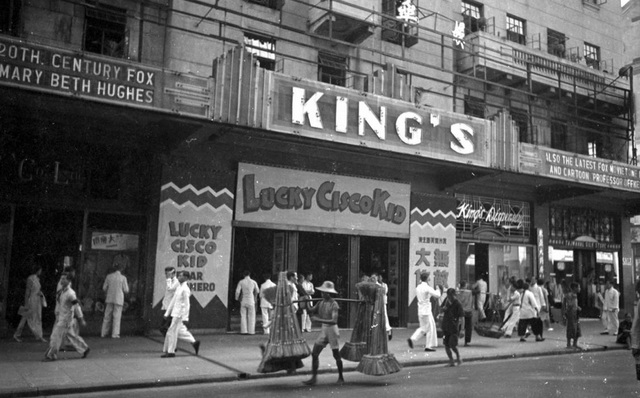 The King’s Theatre was situated in Central on the Hong Kong Island. It was built on the site of Yee Sang Fat[a shop]and the Coronet Theatre. The theatre opened to business on 31th March, 1931 with Ernst Lubitsch’s “Monte Carlo”.

The following description of the theatre is based on news articles published by China Mail and Hong Kong Daily Press.
The cinema was the first cinema in the Far East to have installed air-conditioning system [York and Shipley] in the auditorium. Super-Simplex projectors and Western Electric Sound Reproduction System were equipped. The stage was 40 feet deep and dressing rooms were attached. Fire-proof curtain, which was the first of its kind in the Colony of Hong Kong, was also installed. Special announcing equipment was provided and Deaf-Set apparatus was installed in the first two rows of the circle.

Interior decoration of the theatre was by Arts And Crafts, and the General Electric Company was responsible for the lighting. Rubber flooring of the cinema was by Messrs Dunlop and Company.

There were two lifts in the theatre building, each could carry eight patrons, and serving all landings from the ground floor to the 6th floor.
The lifts were made by Messrs Waygood-Otis, and erected and maintained by Dodwell and Company Limited.Metal windows manufactured by Crittall were installed throughout the theatre building.
The entrance hall of the theatre was on the Queen’s Road Central, its classical ornament in coloured fibrous plaster-work, its bronze railings and rich drapery appealed to those who appreciated enrichments on well known lines. The ceiling of the Entrance Hall was made up of figures, cupids etc. in low relief, beautifully tinted in colours.

The embroidered curtain of the stage was made of silk damasks, velvet and satin. The top drapery was enriched with fringes, cords and tassels in brilliant gold, and the whole curtain was a blaze of colour in gold, orange and green. The proscenium framing had a cresting of open fibrous plaster-work with concealed lighting giving a most brilliant and interesting effect. The poscenium was flanked by two female figures in relief 18 feet in height and was in proportion to the size of the building.
Two flights of steps, one on either side of the foyer, led to the auditorium. Before reaching the auditorium, there were a Crush Room and a Soda Fountain. The Crush Room would be known as the
Mezzanine Floor, and ran along the whole length of the building.

The architects of the theatre building were of the Messrs. Clark and Iu.
The theatre building had six storeys with a dome on the top, with offices, shops and restaurants in the front part, while the cinema auditorium in the rear part.
Besides showings of first run English language films and performances of vaudeville shows, the theatre also served as a venue for political and social functions. The welcoming ceremonies by the Chinese communities of the Hong Kong
Governors were held at the theatre.
On 11th February, 1934, the first Indian talkie " Shyam Sundar" was shown at the theatre.

In 1941, a simultaneosuly translating system of the dialogue was installed at the theatre with 1,000 headphones of the system imported from
Shanghai. A translator was hired by the theatre management to translate the dialogue of the film into Cantonese.
After the outbreak of war on 8th December, 1941, the theatre closed to business, and had re-opened to business as of 14th January, 1942. The theatre re-named as the Yu Lok Theatre while its Chinese name remained the same. Yu Lok is the Cantonese pronunciation of its Chinese name, literally meaning entertainment.
The theatre was always expropriated by the Japanese Armies for political functions. During the war years, only films censored by the Japanese Armies could be shown at the theatre.
The theatre was classified by the Japanese Armies as first-run theatre, and first run Japanese films and Mandarin films produced in Shanghai were always shown at the theatre. The air-conditioning system broke down during
the war, and generator was bought by the management as a precaution against the blackout.

After the end of the war, its original English name was restored. “Bathing Beauty” was the first blockbuster shown at the theatre. The film premiered in
February 1946 and showed for more than one month. The air-conditioning system was repaired in 1946. The anniversary celebrations of the Republic of China and the People’s Republic of China were held at the theatre in the late-1940’s and early 1950’s.

In the 1950’s, the apparatus of the theatre was always upgraded, and the management boasted the theatre to be the first one in the Colony to have stereo sound system. The width of the screen of the theatre was 34 feet after the installation of the CinemaScope screen.
The theatre closed in 1st September, 1962 with a Walt Disney film.

In the 1980’s, the theatre was one of the venue of the Hong Kong International Films Festival.
The theatre temporarily closed on 1st October, 1982, and re-opened on 1st November, 1982 after the demolition plan of the theatre building was cancelled by the landlord due to uncertain political future of Hong Kong at that time. The theatre showed English language films and Chinese films until its closure on 1st January 1990.

There is a small picture of the King’s Theatre here, confirming that it was the first commercial building in Hong Kong to be air-conditioned: http://tinyurl.com/2cqbeqc

If I am correct, the luxury seats at King’s were preserved and re-fitted at Silver (Kwun Tong) after King’s closure.