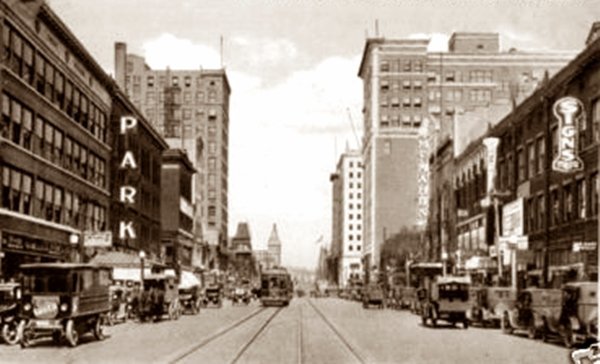 Located in Youngstown, Ohio the once proud Park Theatre was opened in 1901. By 1914 it was operating as movie theatre. By the 1970’s it was running X-rated fare, usually a double feature. The Park Theatre billed itself, "Youngstown’s most unusual Theatre".

I remember seeing a few great movies (musicals generally) with an older sister, probably back in the early/middle 1940’s. Later the Park starting showing live burlesque. And as fate would have it, as a very young teenager, helped my older brother who had a contract to repair the metal doors in the back, access in through the alleyway. I never remember the Park having any frontage to East Federal street. In those days, say 1940, 1950 & 1960’s. the three top movie theatres in Youngstown were the Palace, the Warner, and the Paramount. Second line were the State Theatre and the Park. Then there was the Strand, next to the Isaly’s on the Public Square, which was on it’s way out. The Strand showed second rate cowboy movies in those days, and apparently was more in vogue years earlier.

According to Jack Hynes who was the manager of the Paramount theater and also worked at the Park, in January, 1948 during the run of the stage productions of Oklahoma, the main grid of the stage developed a serious crack that threatened to bring the whole grid crashing down onto the stage. It was temporarily repaired so that Oklahoma could it’s complete it’s run, and because of the cost of constructing a new grid, no more live stage shows were booked, and the theater was put up for sale.

The last movies that were shown at the Park were “Time Out Of Mind” starring Phyllis Calvert; Robert Hutton and Ella Raines twin billed with “Black Narcissus” starring Deborah Kerr. The theater was then closed while the owners negotiated with the people who wanted to buy the theater and reopen it as a burlesque house.

The Grand Theatre which was across the street from the Park was the local burlesque house and it was the owners of this theater that bought the Park and moved burlesque over there because of the larger seating capacity of the Park, and on November 16, 1948 the following ad appeared in the Youngstown Vindicator: Special announcement! We are happy to announce the opening of the Park Theatre as our new home for burlesque. Due to the large seating capacity, we will be able to give our patrons of Youngstown and neighboring cities throughout the district … Bigger and better shows with no advance in prices! You will be assured of comfortable desirable seats at all performances.”

wolfgirl500: Have you ever heard of an early theater in Youngstown called the Luxor? A brief article about it appeared in the July 2, 1910, issue of a trade journal called The Film Index. It’s in the middle column on this page. Unfortunately there’s no photo of it.

Richard Abel’s Americanizing the Movies and “Movie-Mad” Audiences, 1910-1914 mentions the Luxor twice (Google Books preview) saying that it was one the theaters in Youngstown that catered to Italian audiences, but I’ve been unable to find anything else about it on the Internet.

Abel says that th Luxor was one of the theaters that didn’t advertise in the papers, so information might be difficult to find in the Vindicator, but it might have been mentioned in an article at one time or another, especially around the time it opened. Cinema Treasures has no theaters listed for Federal Plaza east of the Park Theatre, so I’m sure it’s not already here under another name.

I dorecall the Luxor and did run across a small ad for it in one of the ancient Vindicators, but in the process of moving, I lost most of the material I had gathered on Youngstown’s history, so I can’t give you a date. I do though know that in the early 1900’s there were at least 6 theaters east of Central Square.

I tried to list all of the early theaters that I was able to find out about, and did have a scrap book that I had created,but as I said,in the process of moving I had to leave it along with all my other local history notes behind. If this is any help, most of the early theaters were short lived so that by 1920 were just memories.

Oh, and Joe, thanks for the two links. They were very helpful.

While the Vindicator did publish a large story about the opening of the Park, there were very few pictures of it ever published. Even the postcards that do show it’s East Federal Street sign do not have any exterior photos of it’s main enterance. If anyone should come across such a photo please share it with us.

For a time, George M. Cohan had an interest in the Park Theatre, and would come here each year with a show.