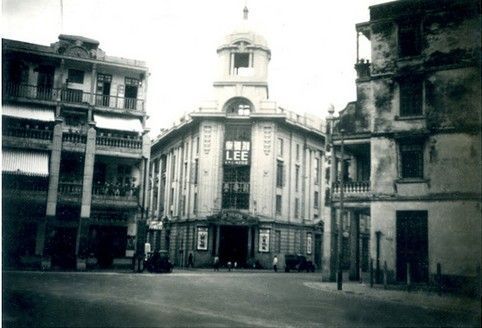 The Lee Theatre was situated in Wanchai on the Hong Kong Island, and one was one of Mr.Lee Hysan’s enterprises.
It was built on an irregular site at the junction of Leighton Hill Road and Percival Road.

The theatre was supposedly opened to business on 10th February, 1927 as its first programme of Cantonese opera was advertised in a Chinese language newspaper on the same day. No opening advertisement of the theatre can be found in the available Chinese or English language newspapers.
The theatre building and design of the Lee Theatre was modelled after European opera house with traditional Chinese style decoration. As reported by a news article published by The Hong Kong Daily Press on 16th February, 1927, the granite mouldings of the theatre were the work of 200 artisans sent down from Shanghai, and protected by a squad of Indian watchmen during the general strike by Chinese workers in Hong Kong.

According to the above mentioned article and another news article published by The Hong Kong Telegraph on 26th April, 1927, the seating capacity of the theatre was built for 2,000 patrons (1,500 on the ground floor and 500 on the balcony and gallery) and the flooring was all of mezzanine. The chairs on the ground floor was divided into compatments of four seats,thus preventing jostling by late comers. The seats were all fitted with spiral springs and covered with tasteful cretonnes. The seats of the balcony and gallery were not covered. The stage had a 40-foot revoving stage and was constructed by the Taikoo Dockyard. The dressing rooms for the artists were spacious and well-fitted. The lofty dome(80 feet in diameter) in the centre of the auditorium was beautiful painted (with dragons and birds with many colours) in true historical Chinese style according to the Hans Dynasty(206BC through 220AD). In the centre of the dome was a massive flower lantern, richly decorated with silk and having 200 modern coloured miniature electric bulbs. On the sides and front of the stage, fine paintings were presented. Just above the curtain were two peacocks, whose beautiful plumage was presented by the use of actual peacock feathers. The side pictures were in the style of the Hans Dynasty and every painting presented an event of Chinese history. The sanitary installations were most up-to-date and the whole building was equipped with fire-fighting apparatus. There were over two dozen windows opening from both sides of the building which afford ample ventilation. The windows and doors were all made of steel which were imported from England.

After its opening, besides Cantonese operas, selected films were always shown when no stage performances were scheduled. Concerts for the celebrations of St. George’s Day and Nelson Day were held at the theatre in the early-1930’s. The theatre was selected as a venue of boxing matches in Hong Kong. Political, social and school functions etc were also held at the theatre.

The theatre underwent renovation in 1933, and Simplex projectors and Western Electric sound system were equipped. The theatre re-opened on 16th December, 1933 with Eddie Cantor in "The Kid from Spain". Fashion shows were held at the theatre and sponsored by the Wing On Company Limited in 1936 with fashion models came from Shanghai.

The theatre underwent another extensive renovation and upgrade of apparatus in 1940.The renovations of the whole theatre were carried out by Messrs. Davies, Brook and Gran, under the personal supervision of Mr.H.J.Tebbutt, who drew up the plan. The exterior facial features of the theatre had been retained, except for a new coat of paint, the changes inside were so complete that it would be hard to recognise the old from the modernised theatre as reported by a news article published by The Hong Kong daily Press on 3rd March, 1941. According to the news article, the wooden seats, with their barriers, had given way to cosy, leather-bound air cushioned seats neatly arranged in four sections. The theatre was air-conditioned and is the only one in the Colony to utilise the air pressure and water-cooled by fan system. The whole interior colour scheme was of a pleasing buff colour harmoniously blended with red. This combined with soft concealed lighting, gave the theatre an atmosphere of comfort and ease. A small cafe with soda fountain was established midway to the dress circle, and also on the first floor was a waiting room with couches and sofa. The theatre re-opened on 2nd December, 1940 with a performance of Cantonese opera. The theatre showed first-run English language and Chinese films as well as performances of Cantonese opera until the outbreak of war on 8th December, 1941. Charles Chaplin in "The Great Dictator" and Joan Fontaine in "Rebecca" were premiered in Hong Kong at the theatre in 1941.

The only appearance of Herbert von Karajan in Hong Kong as a conductor in Hong Kong was with the Vienna Philharmonic Orchestra on 25th October, 1959. The programme on that night included Beethoven’s Symphony No. 7 and others. As the area of the stage of the theatre was limited that the musicians had to be cramped on the stage.
As its acoustics was poor that the theatre was rarely used as a venue for concert.

The theatre had renovations and upgrade of apparatus in the 1950’s and 1970’s. The lighting system was greatly improved for the theatre to be used as a television studio and live television shows performed at the theatre. In the 1980’s, a net had to be placed under the dome to prevent the decoration from falling down. The projectors and the sound system also had not been upgraded to the latest model in the 1980’s as the theatre was pending demolition.

The Lee Theatre closed on 19th August, 1991 with a farewell variety show. The theatre was demolished and a high-rise shopping mall with shops, restaurants and cinema was built on the site. The decoration on both sides of the proscenium arch was preserved and placed at the ground floor lobby of the new building.

Thanks Raymond Lo for another fine history.

After the war broke out on 8th December,1941,the backstage of the theatre served as a shelter of the Lee family.