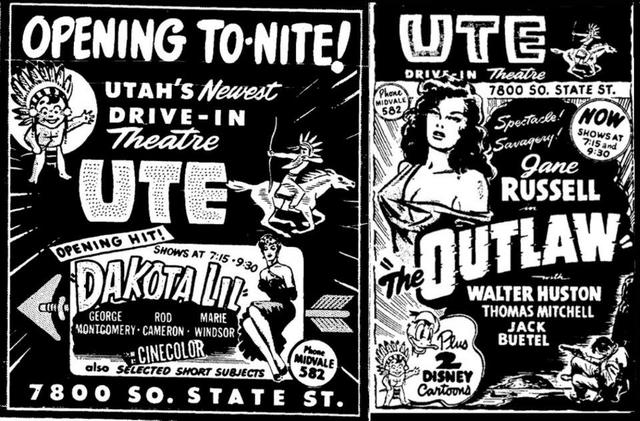 Located on 7800 S. State Street the UTE Drive-In was opened on April 12, 1950 with George Montgomery in “Dakota Lil” when it was operated by Horace & Spencer Burkinshaw. It was busy playing the Disney classic, "Shaggy Dog", a forgetable "Westbound" was the second feature, this was on October 2, 1959. It was closed in 1983.

Thanks Chuck,I was going by the silly newspaper ad.

I have a tape recording of my great-grandfather, Zachariah Brown, talking about how his father, Silas Brown, started the first movie picture theatre in midvale. Called it the alysian theatre (elision; probably spelled it wrong, but it sounds like it looks). It started in Zach’s mid teen years which would have been around 1915. The brown family ran this theatre as a family business primarily. Zach and his brother, John, learned how to run the machines as teenagers and helped sell candy during the change of the reels (i.e. which was about every 15-20 minutes). That’s all I know about it. Would be cool if someone else knew more information about this theatre and could help verify it’s existence. Figured you might since the ute is the oldest midvale theatre shown here.
Thanks, Isaac Brown

Did you need a ute to go to this drive-in theatre?