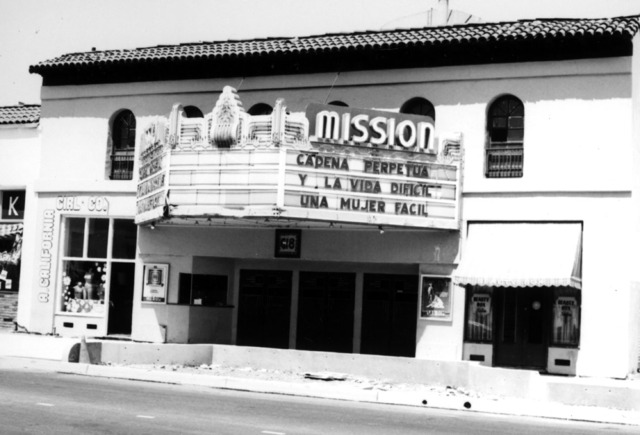 An old vaudeville house on lower State Street, the former Mission Theatre was built in the 1930’s and had 1,000 seats. By 1941 it was operated by Warner Bros. Circuit Management Corp.

In the late-1980’s, it was gutted and converted into a fourplex (built within), with a new marquee. The old stage house was walled off and and the dressing rooms converted into retail space. There is a small history display on your right, when going to the cinemas, before you go upstairs to the restrooms.

Built in either 1912 or 1913, the Mission Theatre lasted as such until 1988. The following year, it became the Metro 4, having previously been operated by Mission Theatre Enterprises as a Spanish-speaking picture house (from at least 1967, through 1983).

I gotta say that Metro 4 has been really bad. The manager there needs to step it up a lot. A Drama Queen.

The Mission Theater is mentioned in the March 6th, 1913, issue of Builder and Contractor. An addition to increase seating capacity was being built at that time. 1912 would probably be the latest date at which the original part of the theater was built. But, when dealing with buildings in Santa Barbara, it’s useful to remember that much of the town was destroyed in the earthquake of 1925, and many buildings had to be entirely rebuilt, so that it’s possible that nothing remains of the original construction. Other buildings survived, but were then, or in subsequent years, extensively remodeled to conform to the Spanish-Mission style which the city officially mandated for new construction after the earthquake. Thus, part, or none of this building may date to 1912 or earlier, and the Spanish style front most likely dates to the mid-1920s or later.

The Mission was a dive for many years. I don’t recall it looking anything like the current Metro 4. I think the entire front got a major facelift about the time of the Paseo Nuevo project. I used to pass by the Mission all the time in the 60's and70’s. I was always curious to see what the latest Spanish speaking film poster would look like. I always wanted to go inside, but that part of State St. was really pretty bad in those days. People now can’t really imagine that there was a time when you could walk down the middle of State St (I mean literally the middle of the street) in the afternoon and not see a car in either direction for blocks. There weren’t any trendy boutiques down there in those days. Just liquer stores, porn shops, thrift stores and lots of bums (well, there’s still lots of bums there)

Definitely a four-screen theatre – more than 700 seats, too!

As seen after the June 29, 1925 Santa Barbara earthquake: View link