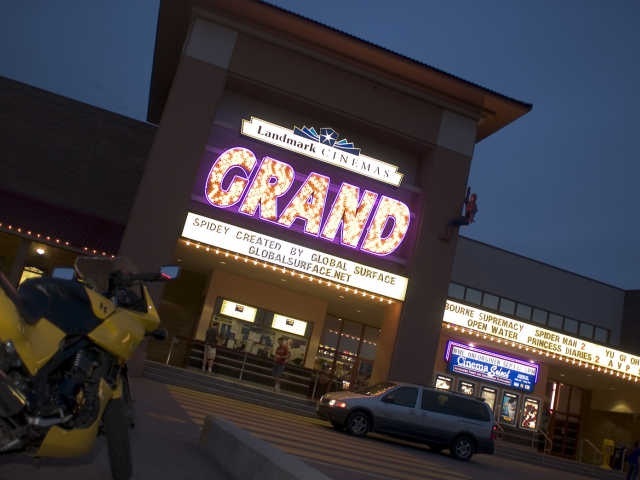 The Grand 10 Cinema is now operated by Landmark Cinemas with seating listed at 2,161. The smallest auditorium seats 163 and the largest 292. The theatre plays firt run attractions. There is a small photo of the theatre on the Landmark website.

Any further information on the theatre would be appreciated.

There is a picture of the the theater’s entrance and marquee sign here: View link

The Grand 10 and the power centre it is located at, McCurdy Corner, were built on the site of a Flintstones theme park, which originally opened in 1968. It operated until its closure in 1998 after negotiations between the park’s then-owner and Hanna-Barbera over licencing rights to the Flintstones characters were unsuccessful. The park was later demolished to make way for construction of McCurdy Corner and the Grand 10.

Caprice Entertainment was the company that built, opened, and ran this theatre until Landmark took over operations. My father ran Caprice’s Showcase 5 in Westbank at the time, and oversaw The Grand 10 construction.