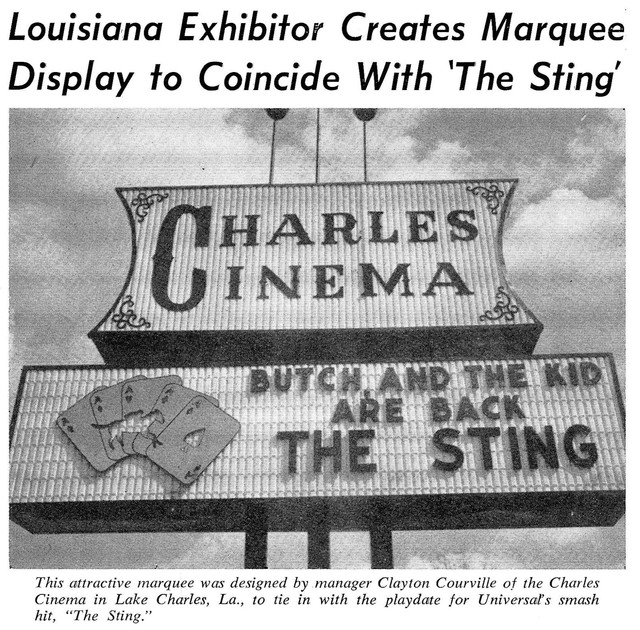 Opened in 1970 as a deluxe suburban single screen house, it was later acquired by United Artists Theaters and expanded and modified to become a triplex. Although it survived Hurricane Katrina and later tornado damage, it closed in 2006, ending its days as a discount cinema. In January 2011, asbestos abatement was underway with demolition to take place in the months following.

There is an article about the Charles with a video here: http://www.kplctv.com/Global/story.asp?S=13896340 and there is a picture of the theater on its page at CinemaTour: http://www.cinematour.com/tour/us/277.html

<<< * it was later acquired by United Artists Theaters and expanded and modified to become a triplex.* >>>

Actually, this was a triplex while still under Ogden-Perry ownership.

A couple of corrections to the above information and the information on the KPLC link. Lake Charles had Hurricane Rita, not Katrina. The theatre was open after Rita, but the last operator had to shut down when his weekday business never came back after the hurricane.

The theatre very unique. As stated it was built a single screen by Ogden-Perry Theatres, a small independent company out of New Orlean/Baton Rouge. In a few years they add two screens to the building but the two screens had it’s own box office, concession stand and lobby that was seperate from the single screen. The projection booth was also seperate. The only way to get from the two theatres to the single was a door behind the concession stands. In spring 1984 Gulf States Theatres took over operation of the theatre after Ogden-Perry went bankrupt. In November 1986 Gulf States was sold to United Artists Theatres and they operated it until the lease expired and then it was operated independantly. In it’s hey day under Ogden-Perry, it was the best house to see the best films in town and played only the top films.