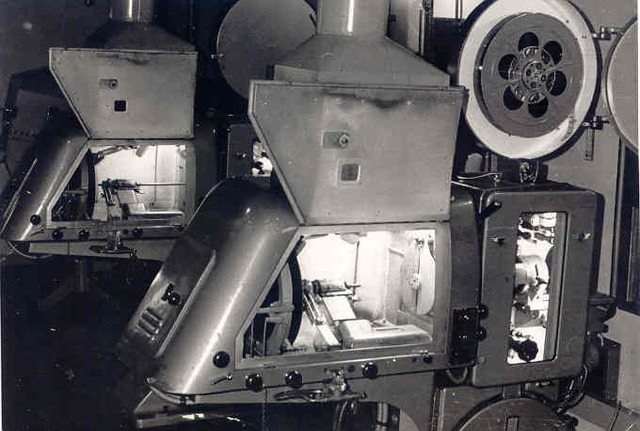 Located in the potteries town of Hanley, Staffordshire. The ABC Cine-Bowl was opened on 23rd August 1963 with Charlie Drake in "The Cracksman". The 1,320-seat cinema had all its seats on a single level, and was located upstairs from the 28-lane ABC 10-Pin Bowling Alley. Organist Peter Kilby played the ABC’s touring Hammond elecronic organ. The Todd-AO screen was 60 feet wide x 20 feet high, with the CinemaScope ratio being 47 feet wide and the same height, and ordinary widescreen was 37 feet wide. The ABC circuit were taken over by EMI in 1969.

Odeon Theatres took over the chain in 2000, and they quickly closed the ABC on 10th December 2000. The 10-pin bowl had become a nightclub, and finally a casino. The building stood empty for several years, and was demolished in February 2008.

This debate may be of interest (to some), but it doesn’t have much to do with the poor old ABC Hanley! Actually, the film that led to the Rank/Paramount rift was a now forgotten Dean Martin/Shirley MacLaine comedy called All In a Night’s Work, which went out on the ABC circuit in June 1961, Breakfast At Tiffanys was not until November. MGM may have had a prolific output in it’s heyday, but like most Hollywood studios, it’s heyday was long gone by the late fifties. This didn’t stop MGM doing a deal with Rank in 1958 to give half of it’s output to the Rank circuits, which led to such plums as Hitchcock’s North By Northwest getting an Odeon release. They were even happy for some films to go out on the National circuit, such as the Doris Day/David Niven starrer Please Don’t Eat the Daisies and George Pal’s The Time Machine. It was the refusal of a National release for the awful remake of Cimarron in early 1961 which led to MGM going back to ABC for all their releases. Along with Paramount’s switch a few months later this more or less killed the National release.

The question of branding is problematical. ABC began rebranding it’s circuit as simple ABCs in the late fifties but it took years to complete the process. As for the television business, I doubt that many associated the two and as far as logos goes, the ITA specifically forbade ABC from using the cinema style logo for the TV station. Rank did not consider “Odeon” to be a “brand” as the Rank circuit included Odeons, Gaumonts and a few other non standard names, the only element of branding was that all cinemas displayed Rank’s gongman. It wasn’t until the mid eighties that a new MD, Jim Whittell, became obsessed with “the brand” and renamed all the remaining non Odeons, dispensed with the gongman and even had the company renamed from Rank Theatres Ltd. to Odeon Cinemas Ltd. There could hardly be brand loyalty in the cinema business as long as distributor alignments and barring dictated which cinema you had to go to to see a particular film, and this practice continued until the advent of multiplexes.

When I joined Rank in the 1970s, the prevailing attitude among managers was that we were a cut above ABC. To some extent this was a result of basking in the reflected glory of prestige West End operations, which ABC could not match, and many provincial cities (such as Bristol, Birmingham, Manchester and Newcastle), where ABC were in a markedly inferior position to Rank. The idea that anyone acquiring both circuits would have adopted the ABC name is highly unlikely, would you rename the Odeon Leicester Square the “ABC Leicester Square”?

Hmm. Point 1. I do agree with using Odeon as a Brand. But I disagree. Ref Birmingham. ABC had more Cinemas in the Birmingham area. then Rank.. The ABC Forum New Street where I was based for a short period. Took more money then the Odeon new street. The Gaumont after “The sound of Music became a white elephant. Odeon Queensway did not turn in a Net profit for years before closure. My Cinema "The Capitol Cinema” did better business then Rank did from the 3 sites. They tried buying us out in fact… As I have said previously as my family had financial interests in both Rank ABC and the Clifton circuit I have studied the balance sheets..

This debate happened to arise in the comments section of ABC Hanley and thus here it has remained.

Re MGM, the alternate circuit release pattern commenced with Hitchcock’s ‘North By North West’ in 1959 following a period of estrangement precipitated by the film ‘Gigi’ which ABC refused to present on a roadshow basis.

It is well known that Paramount Theatres were first offered to ABC but that the latter declined first refusal hence Rank’s more presitigious City Centre presence in those locations – that is not to say, however, that ABC’s outlets were any less popular- indeed, the Haymarket Newcastle’s box office receipts exceeded those of the Odeon for many years.

The ABC TV logo was similar to that of its cinema circuit whilst not being identical and everyone I knew in the North East associated it with local ABC Theatres, particularly the ABC Globe, Stockton (happily undergoing restoration) where, over the years, millions of people went to see first class live presentations from The Royal Ballet and English National Opera to pantomime and One Night Stands.

As I understand it, the debate was about Odeon and ABC as ‘brands’ as opposed to Rank or EMI and the like and there is no question that Cinven’s decision to adopt ‘Odeon’ was the correct one at the time.

In any event, the ‘points scoring’ which seems to have reared its ugly head is rather futile as we are all supposed to be friends here – or so I understood. The circuits as we remember them have all but disappeared and even the remaining Odeon cinemas have lost their charm and atmosphere as a result of further subdivision and austerity measures. Only the Odeon Leicester Square uses tabs nowadays and then only with 2D presentations and it is questionable for how much longer.

Some of my best friends were Rank Managers and,for all the ‘cut above’ attitude alluded to, our pay and conditions were superior to those of our Rank/Odeon opposite numbers. My dear deceased friend at Odeon Sunderland was on a thousand pounds a year less than I was on at ABC South Shields (a much less important location) back in 1980 and the poor chap’s pension was derisory when he was finally in receipt of it.

Fortunately for Rank and ABC,however,he, like most of us, was not in the industry primarily for the money but because of his love of it and there was a cooperation and camaraderie between Odeon and ABC Managers which co existed alongside a friendly rivarly which, I dare say, does not exist now – nor will ever do again.

@ Terry I agree in every respect. of your comments.

I have been reminded of the Inspection we had to do at night after closure of this Theatre, This had to be done by two people and was strictly done in an order. The boiler house. even with one person walking between the House and Screen Tabs.. while the other walked behind the screen tabs. Even the Exits locks where checked again.. (The time period for me doing this was 1969)

To qualify for a Sunday 6th June, the year will be 1965,not quite the premiere run but nevertheless among those fabulous cinema-going years.

I came across this site by chance, it was a suprise to find the ABC Hanley seeing photos of myself and the rest of the projection staff. It brings back happy memories of this great cinema.From Doug Blakemore.

This is home cinema as it should be:–

Apparently, many items from the ABC are incorporated within.

It’s been a while since your post Doug but nice to see you are still interested in the “Trade”. Certainly great days at Hanley and I will always remember the theatre, picture and sound quality and of course you guys in the “pictures”. Thanks again for posting and sorry for the delay in acknowledging.