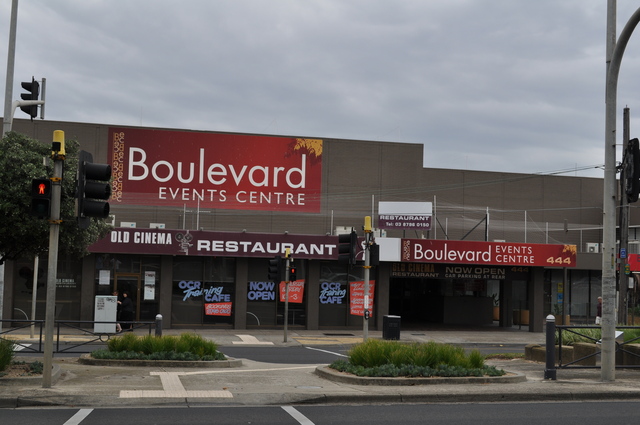 Located in the outer southern Melbourne suburb of Frankston. The Village Twin was built in 1976, on the site of the Frankston Picture Theatre of 1933. It was later sub-divided into a four screen cinema, with the second Village Twin on the opposite side of the road becoming Village 5 6.

In 2011, the Village 1-4 is used as the Boulevard Events Centre and a restaurant.

This cinema was never subdivided into a four screen cinema. It remained a twin screen cinema until its closure, operated by Village Cinemas and then Peninsula Cinemas towards the end. It was not built on the site of the 1933 Frankston Picture Theatre. The original Frankston Picture Theatre was in nearby Playne Street, demolished to be replaced by the Ball and Welch department store in the early 1960s.

The twin cinema in the Peninsula Centre building over the road was only ever known as Village Cinemas 3 & 4, closing some time before this cinema.

I saw many movies here as a kid, I saw my first movie “Teenage Mutant Ninja Turtles” at this cinema. I also saw “Mortal Kombat” here and it was packed out with a line of people going outside the building.

One interesting feature I remember was inside the foyer there was this cool light structure in the ceiling. It was an inverted dome that was multi-coloured and would cycle through different colours.