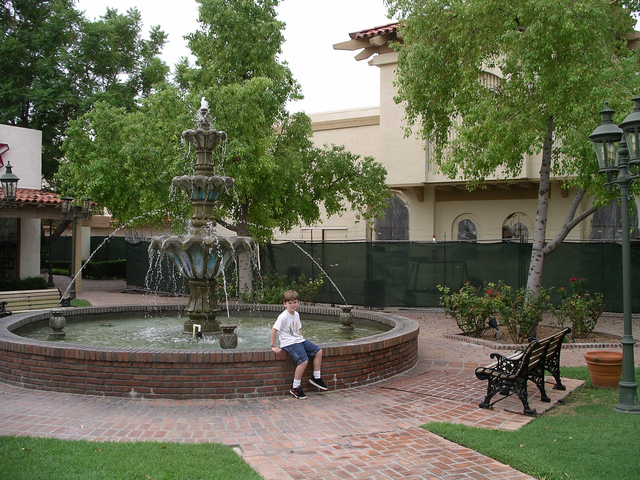 LA Fitness (a gym) took over building and gutted the cinema.

I don’t know about the theater’s entire lifespan, but during the late-1970s and early-1980s, the AMC Town & Country had six screens. See the following article for a reference to it having six screens in 1981. (Scroll down to the “Arizona” section.)

Thanks for the link. Looks like 6 screens it is. Anyone know how to change the map and number of screens?

I was a assistant manager during high school there. This was the first multiplex theater in Arizona featuring 6 theaters by AMC and the was opened in 1971 and closed in 2000. In 1998 AMC opened the Esplanade 14 just 1 mile down the road and AMC made this there Independent arts theaters but years of service and outdated design took this theater. LA Fitness tore the insides out and make a fitness center… but you can still see the old box office window still there.

Wrong on both claims. The AMC Town & Country 6 actually opened in 1976. It was not the first multiplex in Arizona.

What was the name of the owners before AMC? It was something else in the 70s. My first movie at this theater was “Jaws 2” in 1978…scared the hell out of this seven year old.

I worked at the Town & Country during high school from 1980-1982. Mr. Cedar was the manager during that time. Got to work with some really cool, fun people and the summer months were a blast. We played Raiders of the Lost Ark, Stripes, Tron, Star Wars, Fast Times at Ridgemont High, American Werewolf in London among other blockbusters. I remember the ice cream shop and Jutenhoops around the corner. Good old times. This theatre opened in 1976 and closed some time in the 90’s.

This theatre last appeared in the Arizona Republic on 9/25/2000.

Wrong on both claims. The AMC Town & Country 6 actually opened in 1976. It was not the first multiplex in Arizona.

I think you didn’t read what was said correctly, he said that it was AMC’s first multiplex theater in Arizona, not Arizona’s first ever multiplex.