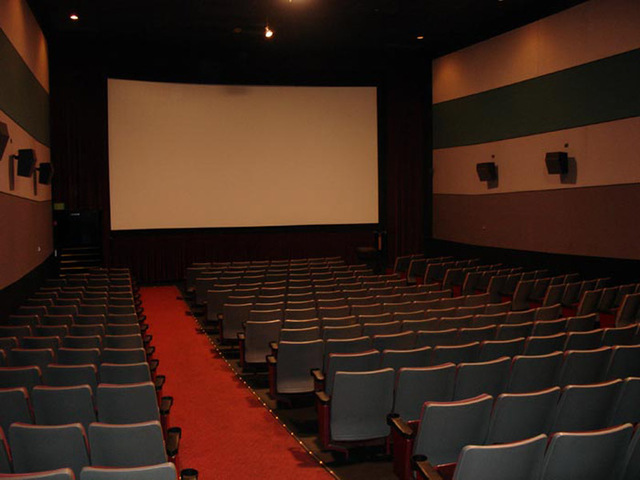 The Pierside Pavilion 6 was opened on May 24, 19991 by Mann Theatres. Located directly across the street from Huntington Beach’s famous pier and main beach, on the second level of a shopping plaza, the theatre always struggled to compete with the city’s outdoor draws and thriving downtown nightlife. Sold to Edwards in the early 90’s, the theatre would return to the Mann fold after Edward’s bankruptcy, before finishing out it’s days under the operation of SoCal Cinemas/The Movie Experience. The Pierside Pavilion (renamed the Pierside Surf City 6 under SoCal) closed in March of 2008 and sat vacant until December 2010, when the theatre was converted in to 33,049 square feet of office and restaurant space.

Constructed in an compact “L” shape, two small auditoriums were accessed directly off the shallow two story lobby’s left side, while the remaining four auditoriums were located down a hallway on the right. The facility featured two THX certified auditoriums (#4 & #6) and 70 mm capabilities in #6. Auditorium six was also built with pseudo stadium seating (the rest of the complex was traditional slope).

For some reason, the map above is showing this theatre in the wrong area. The Pierside Pavilion was on Pacific Coast Highway, across the street from the ocean.

This was a nice theater for the first five years or so… then came the sand and the mildew… good memories of screenings like Hook, Batman Returns, Alien 3, The Last Boy Scout… there used to be a pool hall downstairs as well and a karaoke bar called Mr. K’s… fun spot circa 1993!

When Mann took the theatre over for a second time, there was a significant refurbishment. It was in near pristine condition during it’s final years.

After closing, the theatre remained fully equipped and in “turn key” condition. When I went on a speculative walk-through, it literally looked like the theatre was ready to reopen on a moment’s notice (there were even unused office supplies neatly organized in the office). Unfortunately, the lease and track record just didn’t lend themselves to procuring a new operator. Had there been more space for support areas and a kitchen, I think it might have been a prime candidate for a “fork and screen” conversion, but that will forever be confined to speculation.

Yep, you never know CTCrouch, when GCC poulled out of Augusta,Ga. They left a nice looking 8 plex,but that side of town would be nothing but problems for a theatre owner.