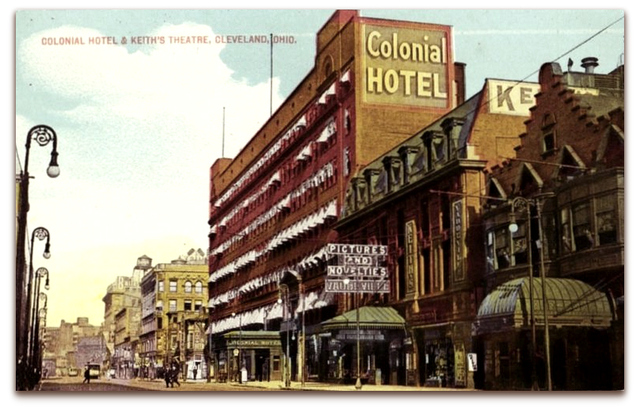 From looking closely at Google maps and some very old postcards, The Colonial Hotel was located at approximately 530 S. Euclid Avenue in Cleveland. It housed the Colonial Arcade which connected Euclid and Prospect. I think this is the Euclid side, as there are pictures of a clothing store on the Prospect side. At any rate, this might help someone zero in on the exact location of this theatre.

The book “Cleveland: The Making of a City,” by William Ganson Rose, has a brief paragraph about this theater. It says that the house opened in April, 1904, as the Prospect Theatre. Originally the home of the Baldwin-Melville Stock Company, it was taken over by B. F. Keith in 1905, renamed Keith’s Prospect Theatre, and was operated as a vaudeville house.

Some time later, Keith took over the much larger Hippodrome Theatre (in 1908 or 1909, as near as I can find,) and the circuit dropped this house and it reverted to its original name. It operated as a lower-priced independent vaudeville theater for several years, but the building was eventually rebuilt and converted to retail use. A history of Cleveland published in 1910 tells pretty much the same early story about the theater, but gives its opening year as 1903. Another source says that the building was demolished in 1965.

A 1908 issue of Insurance Engineering reported on a fire in Keith’s Theatre which produced “…clouds of smoke so dense that they shut out the sun and drove the crowds, choking and coughing, from Prospect Avenue….” The fire, the report said, had started in a motion picture machine, so the house was showing movies as part of its program at least as early as 1908.

I agree with you, Joe. There is another postcard on the site you reference that shows the Prospect side of the hotel with the Keith theatre. The awnings and building shapes match. Using Google maps, a rough estimate of the address of Keith’s theatre would be in the range of 600 Prospect.

Alan F. Dutka’s 2016 book Historic Movie Theaters of Downtown Clevelandprovides some updated information about the Prospect Theatre (Google Books preview.) Dutka says that the stock company remained in the Prospect only seventeen weeks after opening in April, 1904, before the Keith circuit took over the house.

After moving its two-a-day vaudeville to the Hippodrome in 1908, Keith ran the Prospect as a movie house, combination house, or (briefly) a live playhouse until closing in 1923. The building was still standing, though unrecognizable due to multiple remodeling jobs, into the early 21st century.