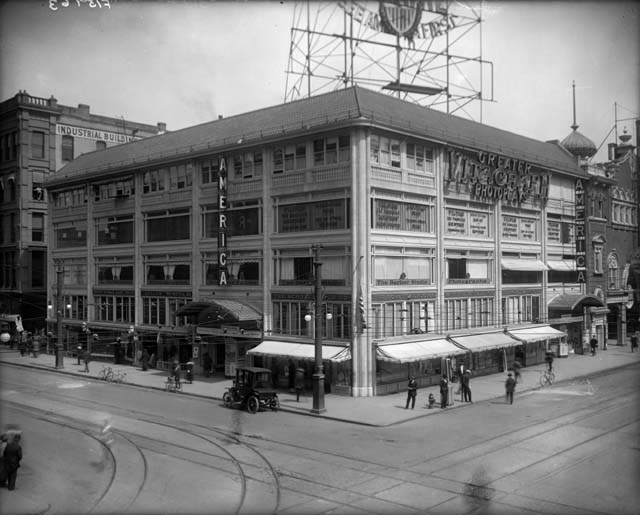 The America Theatre was opened around 1917. In 1922 it was equipped with a Robert Morton theatre pipe organ. It was operated by Universal Pictures chain from 1925 until 1927. It was closed around 1930.

The March, 1917, issue of The Doherty News has a bit of information about the America Theatre:

“The new America Theatre of Denver, one of the finest in that city, recognizes that ‘Business Follows the Lighted Lamp,’ and uses two immense signs to designate its locality.

“One of the signs is already in position on the side of the building, and is fifty feet long, by ten feet high, requiring 1,200 lamps of 40,000 candle power. The other sign, believed to be the largest in the west, will be erected on the roof and will be 52 feet high and 60 feet long, weighing fifteen tons, requiring 2,300 lamps of 30,000 candle power. This sign will carry the words, ‘America Theatre—See "America” First.’ The fact that the streets on which the theatre is located are illuminated adds greatly to the effect. One sees the two lighted avenues crossing each other, forming a distinct cross with the glow from the signs at the center.

“The theatre further capitalized illumination in its interior. The lighting effects obtained through dimmers and varied colored lamps surpasses anything seen in Denver, and is causing much favorable comment.”In its early days, the America Theatre had entrances on both 16th Street and Curtis Street, as can be seen in this 1922 photo from the Denver Public Library.

The America Theatre’s Robert Morgan theater organ, installed in 1922, is now installed in the Broome Center for the Performing Arts (The Forum) in Binghamton, New York. A document from the Center says that the America Theatre closed in 1930 and was replaced by a ten-cent store. Here is the Cinema Treasure page for the Forum Theatre.