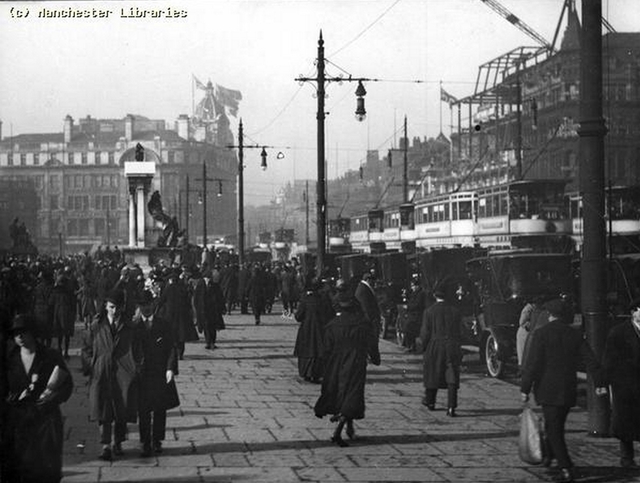 Located in the centre of Manchester in Piccadilly Gardens. The Piccadilly Picture Theatre was a conversion of the former Mosley Hotel. Designed by architect Percy Hothersall, it opened on 31st July 1922 with Mable Poulton in “The Old Curiosity Shop”. Seating was provided in stalls, dress circle and upper circle levels, and the proscenium was 38 feet wide. The two semi-circular balconies curved around to meet the rather plain proscenium opening. Beneath the orchestra stalls in the basement was a 500-seat restaurant with a dance floor and a cafe. It was equipped with a Wadsworth 4Manual organ which had 42 stops, the organ chamber was behind the screen at dress circle level.

In November 1924, the basement ballroom was enlarged to twice its size, due to its popularity.

The Piccadilly Theatre was closed in the week of 2nd August 1937 with Gracie Fields in “The Show Goes On”. Gracie Fields was appearing at the Grand Theatre, Blackpool that week, and spoke to the Piccadilly Theatre audience on closing night via a telephone hook-up. The closure was sudden, and was said to be financial, and also due to the opening of the Paramount Theatre(later Odeon) and Gaumont Theatre, both huge cinemas in the city centre. The Piccadilly Picture Theatre was converted into retail use, becoming a Littlewood’s department store for several decades. In recent years a Co-Op supermarket, a branch of Boots pharmacy and a Bella Pasta restaurant operate from the ground floor of the building.

The ground plan was not rectangular; the side wall to the left of the screen stepped in by about 9 feet. This created a decidedly odd seating layout. Stalls seats had an aisle centred on the screen with 16-seat-wide blocks to left and right, but there was a third 6-seat-wide block on the far left. Because the seats were in straight rows, the sight lines from the extra block on the left must have been dire (the screen was about 20 feet to their right). This asymmetry was repeated in the two circles. However their stepped rows of seats were on curves arranged around the screen, so sight-lines would have been better.

Projection was from the back of the lower circle. The projection suite was behind the middle five of the lower line of square windows in the photo above (i.e. with triangular tops above them).

There were a lot of stairs to climb in there; and a lot of full-height stairwells, plus three lifts. There was no depth to the stage. There was a basement (ballroom) and a sub-basement with ventilation plant etc.

The pilasters (see the photo) divide the facade into 5 bays. From left to right, at pavement level the bays were above: a pair of exit doors for stairs down the far corner of the building; a main entrance; two shop units (one narrow, one wide); a second main entrance; a narrow shop unit.

Hi, Thanks for the article. I have a Nickel plated fork that an ancestor appears to have “acquired” from this establishment, marked with “Piccadilly Theatre Manchester”. Does anyone want the fork?

I’d be happy to take that fork off your hands. It’ll sit next to my Odeon fork with the Rank logo on it.

contact me at prestwichsloopy at gmail with a dot com on the end :–)