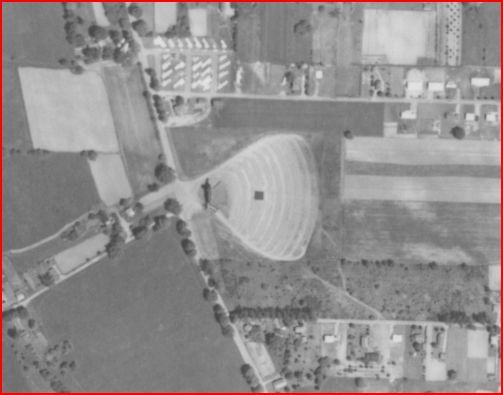 The Valley Drive-In was opened on May 12, 1950. Sayre, Pennsylvania had the beautiful downtown Sayre Theatre that just had to be tripled and basically ruined. When times got bad for the Valley Drive-In, it just went dark. and was demolished in 1986. The good times in the 1950’s would see the 500 car lot filled. The Valley Drive-in Theatre was operated by J.A. Ryan.

This was a nice drive-in, I specifically remember going there with my Mom & a family friend while the guys were putting the countertop in their kitchen—-the smell of the adhesive would gag a maggot, so we left. The movies playing were Ben & Tales From The Crypt. This was the summer of 1972, after Tropical Storm Agnes was long gone.

Approx. address for this drive-in was 400 North Elmira Street.

The address in the heading is way off.

There is now a small retail plaza at the front of the drive-in location, which includes a First National Bank and a UPS Store.

The Valley Drive-In In Sayre Opened Its Gates On May 12th, 1950; And Was Operated Seasonal From May Until Late September.

In August Of 1956, The Valley Drive-In Installed An 85ft CinemaScope Screen.

On April 13th, 1973, The Sayre Fire Department Responded To The Grass Fire At The Valley, But Reopened Shortly Afterwards.

However, In The Late 1970s Into The Early 1980s, The Valley Drive-In Was Popular For Special Events.

The Theater Ended Up Demolishing In 1986, And The Bank Of Bradford County Is Built On Its Site.