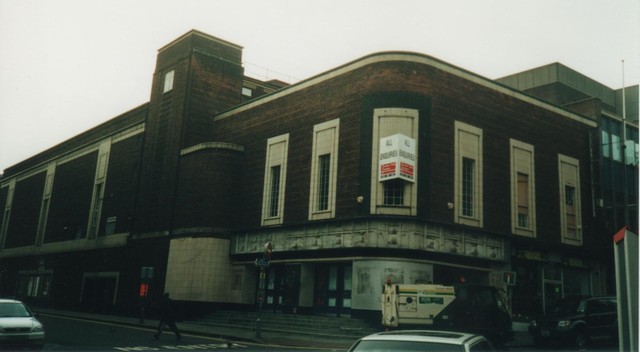 The Carlton Cinema was built by Associated British Cinemas Ltd.(ABC), designed by their ‘in-house’ architect W.R. Glen. It had an imposing position on the corner of Chapel Bar and Mount Street, just 50 yards away from the Ritz Cinema/Odeon, and was the third largest cinema to operate in the city.

The Carlton Cinema was opened on 16th October 1939 with Charles Laughton in “Jamaica Inn”. Seating was provided for 1,294 in the stalls and 783 in the circle.

Re-named ABC from 14th December 1959. In 1960, it hosted the UK premiere of “Saturday Night and Sunday Morning”, starring Albert Finney, which was filmed on location in Nottingham.

Taken over by the Cannon Group and re-named Cannon in 1986, it later briefly became the MGM, followed by Virgin. It was taken back by a management buy-out and re-named ABC.

The ABC closed on 22nd July 1999 with screenings of “The Mummy”, “Ten Things I Hate About You” and “Notting Hill”. There were plans to build a 14-screen multiplex on the site, but these were turned down. The cinema was demolished in early-2001 and a building housing a hotel, bars, restaurants offices and a gym was erected on the site.

Due to the road layout the only view is from this end of the road. The ABC was at the bottom on the left hand
corner.

By chance I visited the site on Sunday 25th July 1999, by which time the ABC had closed (see my photograph). So, rather than closing on the 29th, as stated above, perhaps it closed a week earlier, on the 22nd.