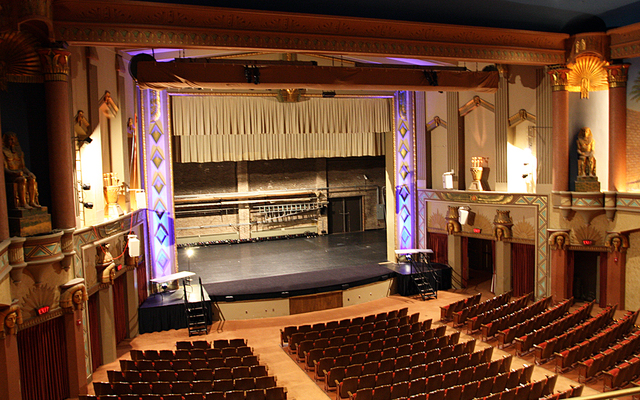 Construction began in 1928, and the DeKalb Egyptian Theatre opened on December 10, 1929 with Edward Everett Horton in “The Hottentot”. It was created during a time when the entire country was caught up in the mystery of the discovery of King “Tut”’s Tomb. The entire country was infatuated with Egyptian clothing, parties, and young Hollywood was turning out mummy movies!!

The architect, Elmer F. Behrns, had studied and loved Egyptology. But instead of throwing together hieroglyphics, falcon wings, and other Egyptian motifs, Mr. Behrns designed this theater with one central theme, that of Ramses II, one of the Egyptian pharoahs.

The Egyptian Theatre’s facade is covered with light sage terra cotta and features a 20 foot tall stained glass window bearing the ancient sacred scarab, holding up the sun god Ra while standing on the earth.

On each side of the stained glass window are two huge pharaohs guarding over the entrance of the theater. The front of the theater is shaped like the gate of a great temple. The current marquee is the fourth marquee to adorn the theater and was commissioned during a recent restoration.

Stepping into the quiet small outer lobby is like stepping into the outer chamber of a tomb. With huge sandstone-like blocks for walls, the only adorned piece is the front of the ticket box office, dusky, sienna red with a golden sunburst above the window.

Passing through the glass doors into the main lobby, one finds the original mosaic multicolored tiled floor underfoot and the ceiling towers some 40 feet above. With cream colored plastered walls, eight towering ecru-colored pillars with adorned cornices of golden lotus blossoms and palm leaves, this stately hall is quietly elegant and is the setting for many private parties and weddings.

Two-thirds the way up the walls between each pillar are huge golden plaster urns, six in all, adorned with lotus buds and palm leaves. Above each urn are outstretched golden falcon wings with the sun entwined with golden serpents. Below each urn is a frosted sconce that matches the frosted milky colored commissioned chandelier that also bears the lotus blossom pattern. At the end of the main lobby is the original double staircase that cradles the chandelier, leading to the mezzanine and balcony.

Moving into the auditorium from the quiet and stately main lobby finds a royal Egyptian courtyard.

Truly, this theater is one of the more incredible examples of the Egyptian style.

The article about the Wurlitzer is from March 17, 2009, so perhaps the organ has already been installed. I used to do volunteer work at the Egyptian but have lost touch with the happenings there.

Regarding the notion that the Egyptian is haunted, I’ve been in all areas of the theatre on many occasions and never encountered anything ghost-like. But if such nonsense will sell tickets, so be it.

Hey Paradise….when were you a volunteer there? I was a volunteer in 79/80. Ran the box office for part of the time.

darrelmw, I was there in 1985-1986. I mainly worked concessions, but was also in the ticket booth at times. I have many fond memories of volunteering there. I was in Dekalb this past summer and couldn’t resist checking to see if I could get into the theatre. Well, I did get in and met the manager, who talked about what they’ve been doing to the theatre lately. I’m happy to report that the theatre looks great.

The Egyptian is alive and kicking. Check out this new article. http://blog.preservationnation.org/2013/03/18/dekalbs-historic-egyptian-theatre-a-pharaoh-inspired-space-gets-a-lively-afterlife/#.UUs7GRyKKuK

I am looking forward visiting & seeing the Christmas show this saturday night at 7:30pm. 12/20/14. Are you going Scott?

Bobby, unfortunately I won’t be in town this weekend. I’m about 5 hours away so it’s a problem attending events there.

According to the website the 35mm projection system has been restored.

Short piece about the Egyptian with photos.

The website is showing all performing arts attractions. No movies listed at all, current or classic.