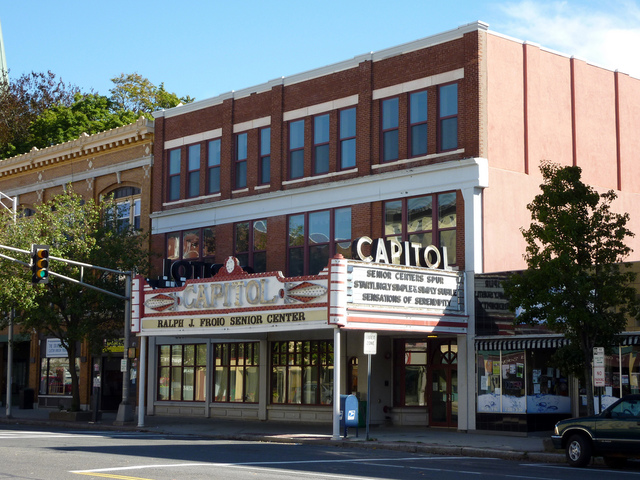 The Capitol Theatre was opened on April 26, 1922 with Diana Allen in “Beyond the Rainbow”. It was a major downtown first-run theater in Pittsfield for six decades until it closed in the 1980’s.

According to current reports, the facade, entry and marquee still stand but are now the entryway to a parking lot.

The marquee shown in ken mc’s 1986 photo is the same one that was on the Capitol in the May 1941 photo on the MGM Theatre Report.

Here is an excerpt from the North Adams Transcript on 3/24/42:

An early morning, two-alarm fire today caused damage estimated at $75,000 to the Capitol theater in Pittsfield, located in the heart of the business district on North street and leased by the Western Massachusetts theaters, Inc., which operates the Paramount and Richmond theaters in North Adams. The fire, which was confined entirely to the interior of the theater by Pittsfield firemen who played five lines of hose on the flames, was discovered at 12:55 o'clock by Raymond Jackson, one of two men employed at night there.

Jackson had a narrow escape from being trapped by the flames in a dressing room off the stage. He was forced to make his way to safety down a spiral metal stairway to the stage. When Jackson discovered the fire, four plush velvet curtains in the stage were burning. He was in the dressing room changing his clothes at the time. After reaching the stage, he put in the call for the fire department and 10 minutes later at 1:05 o'clock a second alarm was sounded bringing more men and apparatus.

According to Fire Chief Thomas F. Burke, the velvet curtains served as a good base for the flames which spread into the auditorium where they destroyed 20 rows of seats and also mushroomed along the ceiling to the balcony where 20 more rows of seats were destroyed. The stage, a large pipe organ and the stage end of the theater, including the back stage, screen and drapes, were entirely burned out.

Edward Dowllng is manager of the theater. He is a former district manager for the Western Massachusetts company and the two theaters in this city operated by the company were in his area. The Capitol is owned by the Berkshire County Savings Bank.

There are some photos of the Capitol on this site:
http://tinyurl.com/m7m5fa

Passed by the theater 2 weeks ago on a bike trip and saw a worker outside sprucing up the marquee. The marquee said, “Governor Swearing-In of” elected official.

The Capitol was one of the two main theaters in Pittsfield when I was growing up there. It was gigantic with a huge auditorium, and large balcony. The inside was classic old theater style. The screen was gigantic and there was not a bad seat in the house. The Balcony was reached by staircases on either side of the lobby. The restrooms were in the basement. I have fond memories of seeing so many great films there as a young child. All of the Disney classics and many more. It is such a shame that it was allowed to deteriorate.

The library of Congress has apparently re-scanned and made High Resolution scans of their photographs of the Capitol Theater. These scans, which are Tiff images each about 20MB big, really let you blow up the image and see a lot of the architectural features (and deterioration) present in the building; something that was difficult to see in the previous JPEG images they had. Well worth a look!! Check the out: http://www.loc.gov/pictures/search/?q=Photograph:%20ma1450&fi=number&op=PHRASE&va=exact&co=hh&st=gallery&sg=true

Here is jacobschen’s link to the LOC photos of the Capitol Theatre in clickable form.

The December 22, 1923, issue of Exhibitors Trade Review had an article about the Capitol Theatre. The house occupied a former garage that was converted into a theater by architect Eugene De Rosa.

The architect of the Capitol Theatre was Eugene DeRosa.