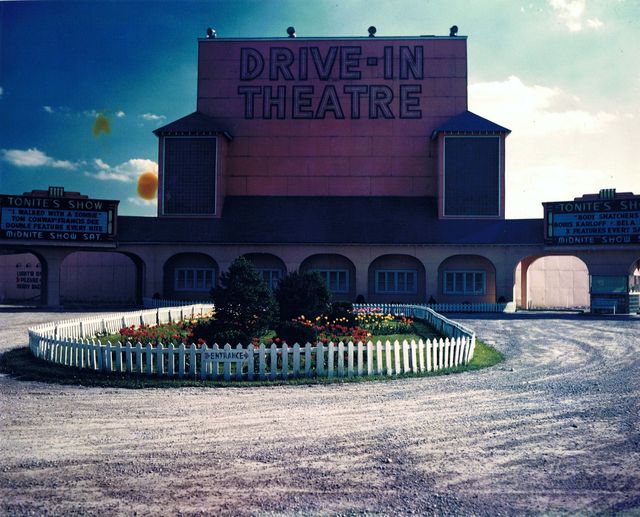 The Toledo Drive-In was opened on August 21, 1946, featuring Gale Storm & Phil Regan in “Sunbonnet Sue”. It was owned by the Toledo Drive-In Theater Co. Cleveland, Ohio and operated by OCHS. The theatre had a capacity for 1,000 cars, a 60 feet wide screen, In-A-Car Speakers, projection and sound equipment by RCA. On August 14, 1959, Theater Corporation of America purchased it and invested $100,000.000 into the theatre. Many improvements were made, including a new marquee, new box offices, enlarged concession areas, entrances, exits and ramps. Also a new playground area was built, including a miniature trian ride and pony cart rides for the kids. Three hundred new car speakers were added, making the car capacity a total of 1,300 cars. It was reopened September 2, 1959 as the Franklin Park Auto Theater with a big grand opening.

The Franklin Park Drive-In was demolished but the indoor theater building is still standing. A Target store and strip mall sit on the drive-in site now. The Franklin Park (aka Toledo) Drive-In was the second oldest drive-in theater to be built in the Toledo area with the Telegraph Drive-In (April 26, 1946) being the oldest.

Check out this You Tube video from 1960

These Snipes Are Found In Better Condition Here: https://www.youtube.com/watch?v=RwoHjAzRvzw, Also Contains The Miracle Mile And The McLendon In Texas.

Billboard, Nov. 20, 1954: “The Toledo and Jesse James drive-ins at Toledo are establishing a record for multiple features by offering Saturday night shows of five and six features each plus an equal number of cartoons. The owners topped the bargain by offering free coffee and doughnuts to all customers who stayed thru the marathon.”