The Space at Westbury (Official) 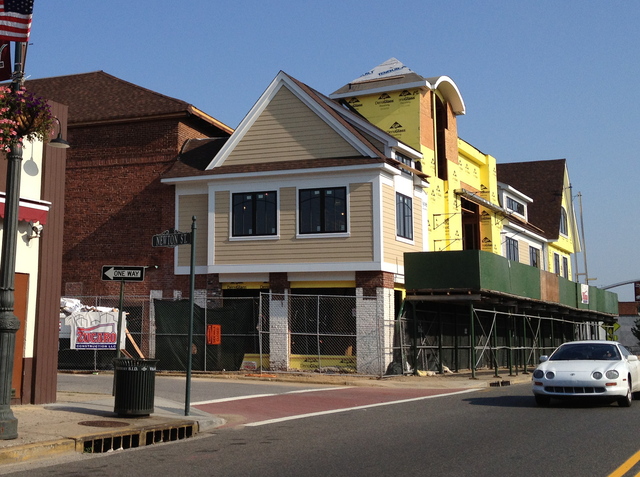 Opened on November 10, 1927, the Westbury Theatre was one of (at least six) Calderone Theaters in Nassau County, Long Island (Westbury, Glen Cove, Lynbrook, Mineola, two in Hempstead including the Calderone Concert Hall).

The theater was designed by architect Douglas Pairman Hall in a unique medieval-Tudor style that remains evident to this day. The beautiful and expansive auditorium originally seated 1,600 and included orchestra, loge and balcony sections. By 1957 it was operated by Liggett-Florin Booking Service.

Twinned "down the middle" in the late-1970’s, the theater managed to make the conversion without altering much of the interior. However, for the last 20 years, it continued to lose patronage as the current owners ran it into the ground, failing to make repairs and charging first run prices for second run fare. A loss of customers initially and incredulously came to a head in the late-1980’s following a much publicized local debacle in which the theater owner called the police to have a senior citizen customer forcibly removed from the auditorium after he refused to give up his cough drops! The windfall from this affair, coupled with the construction of nearby multiplexes ultimately left the Westbury Theater for broke.

In 2001, with crowds dwindling and the leaks growing, the Westbury Theater was forced to shut its doors, having been cited for various building safety code violations. The future of the theater is now uncertain. While the very same owners would actually like to save and restore the theater, and, according to the marquee have formed a campaign for this purpose, it appears as though it might be too little, too late. Years of neglect, a seemingly disinterested local neighborhood, the shaky relationship that appears to exist between the theater owners and local businesses and politicians, and finally, the real estate allure of the location make a second act unlikely for this old neighborhood gem.

By October 2010, work had begun on demolition of the dividing walls in the auditorium, restoration and clean-up, with a formal ‘ground breaking’ ceremony held on October 22 to convert into a performing arts center. Reopened as The Space at Westbury in late-2013.

I think these startups like The Space and the Suffolk should pick the brains of the successful operations, particularly Westhampton Beach Performing Arts Center.

Anyone who has ever walked out onto a bare stage with only the ‘ghost light’ on for illumination knows what the developer of the Westbury Theater forgot: an empty theater is only a shell, until the moment a show is in it. The occasional one-day event booking may be nice, but one can’t keep a building alive, much less an entire community, with a policy like that. He needs a resident producer/director to fill the space with ongoing entertainment, offering runs of at least one week as the old Westbury Music Fair and Mineola Playhouses did in their heyday. Oh, and while I am at it, let me throw out a few other observations: [1] from their web site, the new interior looks tacky, and glitzy in a cheap sort of way, but that may be a matter of taste. What is not a matter of taste is the fact that the photographs are all too dark and are shot using the wrong lens. One gets no sense of the feeling the space can have and the relationship between the house and the stage. Loose the lobby photos that look like the place is still under construction and lighten the others up using basic Photoshop functions and/or take new and better pictures if you really want to attract business/rentals. [2] Further along those lines of thought, the owner/managers should add some basic technical information about the stage’s equipment package and capabilities for potential renters (they can look at the site for the arts center in Raleigh, NC for a good example of what I am talking about. And [3] ‘The Space at Westbury’ is a LOUSY name for a theater. Better to call it the Westbury Theater and Event Center. At least that conveys something…some identity and purpose! When it comes to theaters, I am VERY DUBIOUS about villages and property owners taking advice from ‘marketing’ and other MBA type hucksters, who come up with concepts/names like ‘The Space.’ They’d be much better off talking to theater people, with a measure of horse sense, instead. :>)

Gotta agree with the previous post, for the month of March there’s only 5 shows listed. Most nights passing by there’s no activity, not even the Marquee is lit. And the lounges are still closed. Not even sure what’s going on with the “His & Her’s” lounge across the street. I was hoping for a more lively spring & summer in this town, but I fear its just gonna be another bunch of nights with nothing but drunk guys loitering around and no activity. I just dont see how this place can stay in business at this rate.

Posting an update. Unfortunately not many shows going on, actually this past whole week absolutely nothing. It is another summer of drunk guys hanging around with no activity. We were promised “something going on 365 days a year” to quote it’s management’s Facebook post. Not even the lounge is open every night! 10 events going on for the rest of this month is better than it was, but that’s still 10 days out of just over 20. And most events do not sell out, I was surprised that Billy Idol didn’t sell out, because they do have quite a few big names performing at The Space. I’m sharing a link to a recent article. http://thewestburytimes.com/2014/06/bid-talks-revitilization/ It’s more of a pitch to the Westbury BID than anything else. I live here and don’t see much of a difference due to the lack of shows. The Village will not do anything more to curb the loitering. My bet is people are turned off from coming here because of what they see on Post Ave with loitering & bodegas all over the place. It’s such a shame really.

Too many performing arts spaces on Long Island; one, long established, already in Westbury. Poor management, opening was more than a year behind schedule and the bookings are few and far between; bad location.

Only one booking for the entire month of August on the 1st…the rest of the month is empty!

Several years later they only manage a maximum of three bookings in the main space per month.

With all the dollars that went into the reno this venue is only utilized for a handful of events each month.

robboehm, the Union County Arts Center in Rahway NJ is the same way. 1400 seats fully restored. Brand new 35MM projection room. The works. They do maybe 2 or 3 things a month and maybe 3 to 4 movies a year. I just don’t get it.

Trouble with Westbury is location. Too near the former Westbury Music Fair which has a long successful history. Long Island is overburdened with performance spaces.