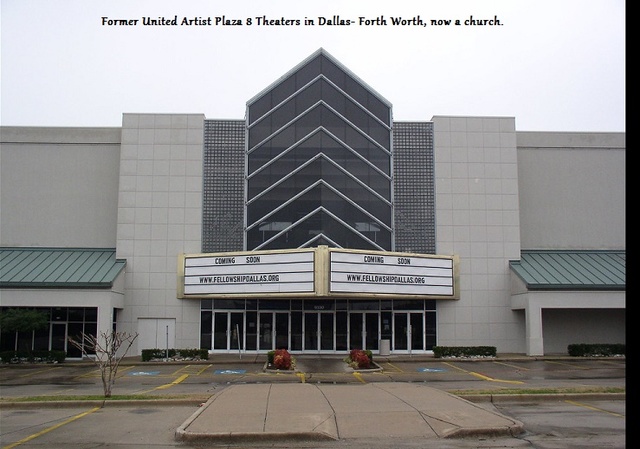 The United Artists Theatre was later renamed UA Plaza, aka the Plaza 8, was a large nice theatre, hosting 8 screens & a big concessions area. It also had a game room. the theatre opened in 1988 & closed in 2004. It was then converted into a church in January 2005.

Contributed by Randy A Carlisle
Get Movie Tickets & Showtimes

Here’s 6 Photos from Jan 2005 of the UA Plaza 8 Theatre, just before the conversion over to a Church. Enjoy.. Click on photos to enlarge..

This was one of the best multiplexes in the Dallas-Fort Worth area in its day; 3 70MM screens and Dolby Stereo in every house.

When AMC announced a multiplex in what was known as Dallas’ Central Zone of movie exhibition to open in November of 1988, United Artists wouldn’t be caught flat-footed. It purchased four acres of land in the shadow of the AMC NorthPark theater (soon changed to the AMC Glen Lakes) and across the street from the venerable General Cinema NorthPark III & IV in May of 1988. The $14 million, 106,000 square foot United Artists NorthPark was drawn up in 1988 and designed to make a splash. By the time the renamed United Artists Plaza opened on May 24, 1989, it was truly a destination theater despite being tucked away behind strip shopping centers. With eight screens and 3,600 seats all on the second floor and dining and entertainment on the ground floor, the UA was not a neighborhood multiplex but a theater people wanted to travel to and spend the night. To accommodate its projection of 20,000 guests per week, an entire three-level parking structure with spaces for 1,100 cars with large parking lots surrounding the complex.

Resplendent in neon and sporting 4 THX certified auditoriums, three with 70mm projection, United Artists was making a statement in the Central Zone. The second floor lobby was filled with a 13-foot video kiosk with two 9x9 CRT monitor video walls. The neon chandeliers glowed purple, rose, white and green. Long after the theater’s heyday, people remembered the memorable escalator ride to the theaters from the ground floor box office transporting you to the four snack bars on each wall, the video wall, lit glass blocks, chandeliers, and theaters. But the Plaza did allow the nearby AMC Glen Lakes to have one upper hand with some of its auditoriums having stadium seating while the UA had no theaters with stadium seating. But the United Artists was clearly gunning for the gracefully aging General Cinemas NorthPark I & II and III & IV in the battle royale while knowing it could outarchitect the AMC project.

“We are sparing no expense,‘ John Panzeca, vice president of United Artists Realty in charge of the company’s North Dallas project said upon its opening. “For years we built theaters that were little, rectangular boxes….I used to point with pride to how inexpensively I could get those projects to come in,” he said. “Today, it’s gone full circle. We have to compete with 48-inch televisions and cable and stereo sound at home. We have to make our theater a more interesting experience.” And the payout was there as the opening week gross for opening film “Indiana Jones and the Last Crusade” was $145,000, a new Dallas record by almost 50% over the previous single-theater mark. Not resting on its laurels, the theater installed a Cinema Digital Sound System for the 70mm presentation of “Edward Scissorhands” in 1990; it was the only theater outside of New York or Los Angeles with the 5.1 disc-based system.

Theaters which took it on the chin in the C-Zone were the Caruth Plaza which shuttered, the Medallion which was downgraded to discount house and the former UA 150 roadshow turned UA Ciné art house. The Skillman theater would also suffer at the hands of the Plaza and, moreso, the UA Galaxy six years later. Theater staffs at the Glen Lakes, NorthParks and UA theaters were all coached well and moved hundreds of people briskly but with attention when they visited any of the zone’s theaters.

The 1994 opening of “The Firm” had the largest box office take in the United States at the Plaza in its opening week and the same was said to be true of “Clear and Present Danger.” In a two year stretch, Dallas would add 175 screens but the UA Plaza just kept going. It played a 31-hour run of Independence Day on July ¾, 1996. The marathon sold $31,000 in tickets at the Plaza in just the first 10 hours. One patron went for five showings including the 4:30 a.m. show.

But the Plaza shuttered restaurants on its first floor as the decade of the 90s continued. Drew Pearson’s 88 restaurant, Vincent’s Seafood were casualties. The General Cinema’s North Park complexes left the area in 1998. Then entertainment places within the Plaza’s first floor boarded up thereafter including the Virtual World gaming center, the Q-Zar arcade, and even United Artists’ own motion theater. The parking complex was so underutilized — generally deserted on weekdays — that the Dallas Area Rapid Transit would use it as remote parking for light rail users. The once vibrant video wall had badly color matched monitors and many monitors had simply flatlined. The two-sided wall became a poorly functioning single sided wall. Three snack bars of the four were permanently closed. Even the iconic first-floor box office was closed on most nights as tickets were sold at the snack bar. And the attraction board on the access road was often out of order. As such, the first part of the 21st Century wasn’t kind to the Plaza with Regal taking on the UA circuit in bankruptcy. Regal was obviously not in a position to spend any money on the property. When the AMC NorthPark 15 was announced, the Plaza was already sensing doom. Theaters lacking stadium seating were in collapse and the Regal shut the UA Plaza theater on Sunday December 5, 2004. The theater’s fall from grace was such that few came to see the last day’s features. The theater complex was converted into a church within a year which continued into the 2010s.

A small correction regarding the name. When this theater opened it was called simply just “The United Artists”. Which confused alot of customers. Most everyone thought that it was the “United Artists Northpark 8”. Since my theater in nearby Garland was called the similar sounding “United Artists Northstar 8” alot of people called us thinking that we were the Plaza. It was only named “Plaza” several years later to hopefully end the confusion. An unusual partial cause of this theater’s downfall. The theater was opened with John Drennan as it’s GM. He was a well regarded GM with many years experience and had even managed the GCC Northpark 1 and 2 in the early 80’s. And he surrounded himself with some well seasoned Assistant Managers. Which included the former GM of the AMC Prestonwood, Bill Skinner. You would move on to be a GM for UA at the Town East 6 and then my Theater the UA Northstar at the end of 1993. Sometime around 2003 or 2004 Mr Drennan suffered a stroke and he could no longer work as a GM. In 2006 I briefly worked with him at the UA Lakepointe where he was held on just as a ticket taker. He was kept on just so he could keep his company insurance. Regal upper management were idiots. They should have allowed him to retire gracefully and keep a pension with insurance. A small point of fact. Regal did not take over United Artists. In 2002 United Artists, Regal Cinemas, and Edwards Theaters all declared bankruptcy. at first it looked like Dallas billionair Tom Hicks and his group would buy out all three and combine them. We were told that he’d keep UA’s leadership on as head of the new company. What happened was that the Anshutz Group from Denver ended up buying all three and they went with Regal’s leadership team instead. Supposedly because they had a higher screen count. During my remaining time with UA, Regal essentially wrecked United Artists. My theater Northstar was closed even though it was always profitable. UA owned both the building and the land it was on. We just paid a monthly shopping center maintenance fee to the shopping center. We had very low overhead. But we closed anyway. Lakepointe on the other hand was bleeding cash. The first thing I looked at was their P&L reports. They had as many managers as employees. And even fewer customers. And it’s GM was just waiting for the place to die. They didn’t do any cleaning or maintenance on anything. I was glad to be gone after four months.

Can anyone familiar with Dallas confirm/recall if “The Hunt for Red October” (1990) played here first run? If it didn’t play this venue, which Dallas theater(s) had it? Any in 70mm?

I visited Dallas a lot when I was younger and saw a good deal of movies here. Sorry to hear it is no longer around. I remember seeing “Muriel’s Wedding,” “Chocolat,” and “Hurlyburly” here, among others.

I went here a few times, even took my nephew to an anniversary screening of Willy Wonka and the Chocolate Factory. The megaplexes were slowly killing these but me and my Dad liked going to less crowded theaters so we’d head over to that area on occasion and watch a movie here or at Glen Lakes 8.