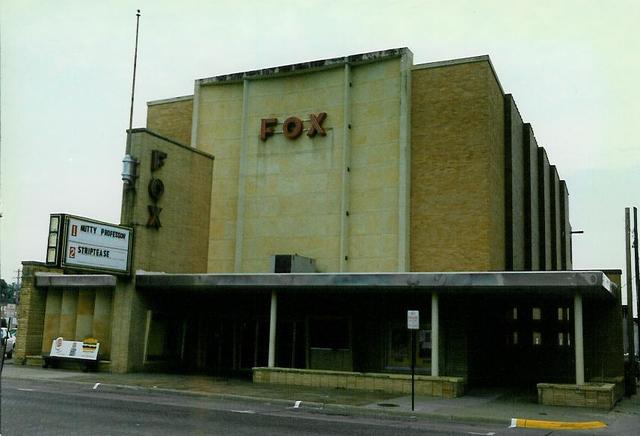 The Fox Theatre opened April 12, 1950 with Joel McCrea in “The Outriders”. At the time, it was state-of-the-art and included stereo. “My father was the first manager. It later included a CinemaScope screen. There were over 1,000 seats, balcony, orginal mural artwork (now covered by the addition of a second theatre where the balcony was located.”

It has gone under many owners starting with Rhoden and mostly recently
Dickinson.

Evidence of a couple of early Hays, Kansas theaters not yet included in the Cinema Treasures database, from the March 13, 1926, issue of The Reel Journal, a regional predecessor of Boxoffice Magazine:[quote]“M.G. Kirkman will open his new Murial Theatre in Hays, Kansas, on April 1, the opening picture being "Tumbleweeds” a United Artists release.

“‘Every effort will be made to make this house one of the best in the west,’ Mr. Kirkman writes The Reel Journal. The new Murial will be directly across the street from Kirkman’s Strand Theatre.”[/quote] Does anybody know anything more about either of these early Hays theaters?

The Fox and the Strand at Hays are both mentioned in the 1951 consent decree pertaining to the various Fox theater chains. The text of the decree was published in the June 9, 1951, issue of Boxoffice. Unfortunately, the scan of it available on the Internet has a page fold obscuring too much of the text, and I can’t figure out exactly what it says, but possibly Fox was running both this theatre and the Strand at that time. The Strand was apparently still open, though.

The Strand’s address of 1102 Main Street sounds like it was a corner lot. If that’s so, then the Muriel, being directly across the street, might have been across either Main Street or across the cross street. Maybe somebody from Hays will know.

Oh, here’s something that sounds a bit omenous, from this page: “Deconstruction of the historic Strand Theatre at 1102 Main has begun with renovations to follow.”

Glad to hear the Fox has been rehabilitated! Here it’s looking a little forlorn in the spring of 1994:
View link

The Strand theater was owned by some company that owned the Fox Theater in 1950 – Continued operating into the late 50s early 60s before closing – It was renovated into a clothing store and building still stands – suspect that elements of the Strand are still there behind the renovation – To see the inside of the Fox after renovate just go to their website:

That picture of the Liberty Theater is very close to the old Strand Theater location that was closed sometime in the 1960’s.

I am pretty sure the Strand was operating in the mid to late 50s – I remember going to see second run movies when my father ran the Fox Theater – I had to be at least 8 or 9 – born in 1949 so, logic would say it was at least open in mid 50s – It was very run down by that time – The building still stands but what is left of the original theater is anybody’s guess.

The Fox Pavilion has been for sale for a couple of years now: http://www.loopnet.com/Listing/19504420/1202-Main-Street-Hays-KS/ It was foreclosed on after the new owner was convicted of a crime that landed him a lengthy sentence in prison. The catering company that used the facility has moved on to another venue, and the theatre sits unused and closed for most days. The Realtor who is listing the theatre will occasionally book events, but most are poorly attended. It still remains in great shape with only cosmetic damages inside (peeling paint, burned out lights, etc.), and has plenty of potential for someone who wants to invest the time and money in to it.

I’m unable to fetch this theater’s web site, but their Facebook page is still active. Their last event was on May 5, and the next scheduled is June 8, so the place is not in heavy use, at least for public events. I don’t know if they host many weddings or other private events, but the place does bill itself as a performance and event venue. There’s no mention of movies on the Facebook page, so it’s likely they aren’t showing them anymore.