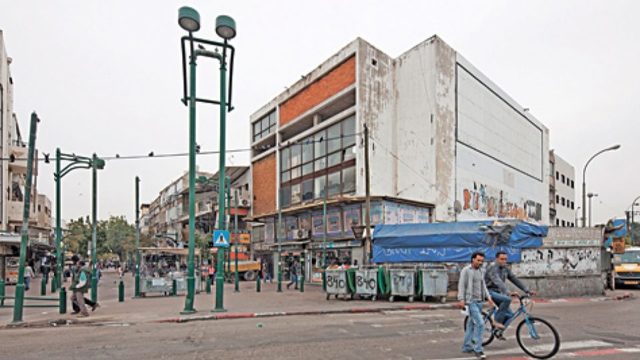 Located close to the Tel Aviv Central Bus Station, on Neveh Sha'anan Street at the corner of Hashomron Street. The Hamerkaz Cinema was opened on 11th September 1956 with Gerard Philipe in “Les Grandes Manoeuvres”. The Mondrian style building was designed by architects Avraham Yaski and Shimon Povsner.

The cinema was equipped with CinemaScope and air conditioning. It was soon screening the latest American and European box office hits.

However, within a short while, it began screening action movies, and by the 1970’s it had become an adult theatre screening pornographic films. Big hits such as “Deep Throat” played for months at a time. It remained an adult cinema until it was closed in 2004.

In April 2006, the interior was destroyed and the facade badly damaged in a suicide bomb attack. The ground floor (foyer) had been in retail use.

In February 2012, plans were proposed to convert the building into 20 residential units.

link to a news article with photo