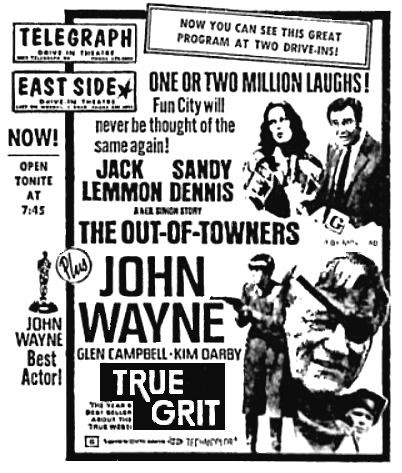 The Woodville Drive-in opened on April 25, 1949 with Roy Rogers in “The Old Spanish Trail” & Bud Abbott and Lou Costello in “Pardon My Sarong”. It had a 350 car capacity. It was built and owned by Joseph Pakulski. He later became a prominent businessman who owned and operated a grocery store and pizza shop. J. Dietz & Co. from Akron, Ohio, was the building contractor. In 1957, it was sold to the Woodville Theater Co. It reopened April 25, 1958, as the Eastside Drive-In and was part of the Jack Armstrong Circuit. On October 17, 1958, the screen tower burnt down causing $20,000 worth of damage. It was later determined to be caused by a short circuit on the neon sign on top of the tower. It was rebuilt for the 1959 movie season.

The Great Eastern Theater Company took over control of the theater and renamed it The Butch Cassidy Drive-In in 1982. Great Eastern also is operating the Sundance Kid Drive-In (aka The Parkside Drive-In) on Navarre Avenue. The Butch Cassidy Drive-In was closed in 1989 and the property was sold to the New Sportsmen Club in December 1990. The screen tower was demolished; the only parts that remain are the concession stand/projector building, which the New Sportsmen Club use, and part of the parking ramp.

Did it ever screen Butch Cassidy and the Sundance Kid?

Opened with a cartoon(not named), “The Old Spanish Trail” and “Pardon my sarong”.