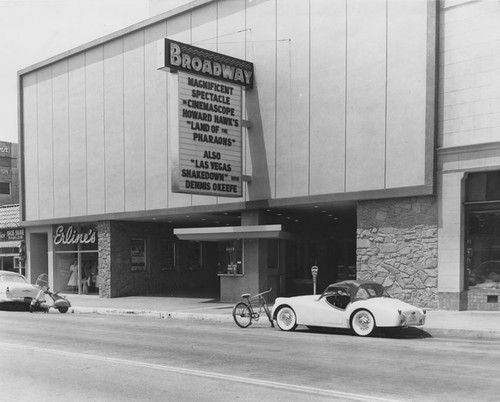 The Broadway Theatre opened on June 2, 1926 with Ernest Torrence in “The Rainmaker”. It was designed by architects Carl Boller and A. Godfrey Bailey for Ed Yost. It was equipped with a ‘mammouth’ organ which was opened by organist Bartley Sims. By 1950 it was operated by Cabart Theaters Corp. A fire on February 25, 1952 caused heavy damage to the theatre, but it was rebuilt and reopened on March 16, 1955 as the New Broadway Theatre, screening Van Heflin in “Battle Cry”. The Broadway Theatre closed in 1987. In 1989, another fire destroyed much of the theatre, and a year later, it was demolished.

Carl Boller designed this theater along with A. Godfrey Bailey. It was built for E. D. Yost and completed in early 1926.

Here is an LA Times article dated 2/14/89 describing a fire at the Broadway:

A police officer on patrol reported the fire about 2:40 a.m., Frank said. Firefighters were able to keep the blaze from spreading to adjoining buildings, and it was extinguished about 6 a.m., she said.

The cause of the fire is under investigation. Fire officials said the building is probably a total loss, but they will not know until the end of the week whether the three-story structure’s walls can be preserved, Deputy City Manager Jan Perkins said.

The theater, thought to be more than 50 years old, was purchased by the city for $900,000 in 1987 as part of Centerpointe, a major downtown redevelopment project that was to have included a hotel and and office complex.

Perkins said the purchase price represented the value of the land, because the dilapidated building’s worth was “practically nil.”

Developers of the project backed out last year after marketing studies showed that a large downtown hotel was not viable. The city has not yet contracted with another developer to build on the site, which extends east from the theater’s location on Broadway between Fourth and Fifth streets to Ross Street.

The theater was once part of the Fox Theater chain, Frank said. A fire in the 1950s destroyed much of the building. In the years before its purchase by the city, the theater was leased to a company that showed Spanish-language films.

City Real Estate Manager Bob Hoffman said the theater’s ultimate fate would have been left up to the developers who buy the site. “Our plan was not to demolish it until we had a developer on the site on the chance that he would incorporate it into a larger development, either as a theater or just preserving the walls.”

Hoffman said, however, that the chances that a developer would preserve the building as a theater were slim. “Large theaters in downtown are considered white elephants today.”

Southwest Builder & Contractor announced in its issue of July 10, 1925, that architects A. Godfrey Bailey and Carl Boller were completing the plans for the Broadway Theatre. The same publication announced the letting of the contracts for construction in their issue of July 31. The building was owned by F.E. Farnsworth and the theatre was leased to E.D. Yost.

Here is an account of the fire in 1952 from the Long Beach Press-Telegram:
http://tinyurl.com/2uaybg

The Grand Opening Ad mentions Bartley Sims at the Mammoth Organ, anyone know what kind of Theater Pipe Organ it was? Sometime in the theatres history the organ was probably removed, know what happened to it?

Spanish Platueresque style of the exterior of the original seen in photos.

1926 Grand Opening ad is now in the photo section.

After the February 1952 fire the Broadway reopened March 16, 1955. That ad is also in the photo section.