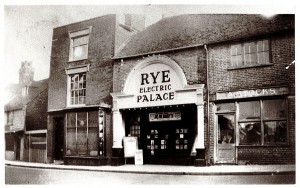 Located in the small East Sussex town of Rye. The Rye Electric Palace was opened around 1910. By 1923, it had been taken over by the Shipman & King circuit.

They closed the Rye Electric Palace in early-1932 when they built their new Regent Cinema in the town. In 2016 the auditorium of the building is occupied by the On Tap Group, who design websites and deal with marketing. The front of the building is a hairdressing salon.