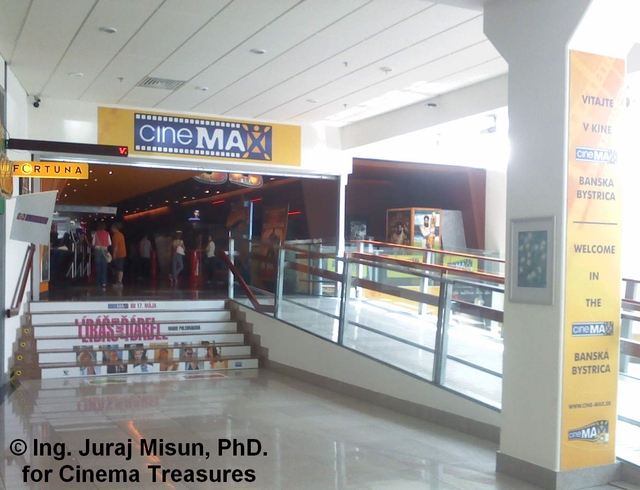 CineMAX Banska Bystrica is a miniplex theater in the central Slovak city Banska Bystrica. It is a part of the largest shopping centre of the region called Europa Shopping Center and it is situated in its eastern part, on the 2nd floor, called ‘Eastern Europe’.

The theatre was opened on 2nd May 2007 initially under the name Europa Cinemas, owned and operated by a local developer. The first screened movie was a public preview of “Spiderman 3”. The first digital screening was held on 15th October 2009 (“The Final Destination” and “Cloudly with Chance of Meatballs”).

The company VAV Invest, who built it, has gained a very good reputation not only for local governments but also for residents. This was due to the fact that the developer (as one of the few) not only promised a cinema project but also has indeed opened one. Thanks to this reputation the developer has been selected for construction in urban centers of Zvolen and Levice.

In 2010 the miniplex screened 6,570 showings and was attended by 314,782 spectators. The average attendance of one screening has reached nearly 48 spectators, which is the best result among the multi-screen cinemas in the Slovak Republic. Among other factors, this is due to the low competition and lack of higher quality shopping centers in the higher territorial unit Banska Bystrica.

On 6th October 2011 VAV Invest sold the miniplex to the local movie distributor Continental Film, who operates miniplex cinemas under the CineMAX brand. With this acquisition the number of its screens increased to 43 overall, in 10 miniplexes and with a total capacity of 7,550 seats. The selling price has reached more than 3 million Euros (about 3.9 million US$) and the main reason for selling was to focus on development projects in Zvolen and Levice.

Europa Cinemas Banska Bystrica was rebranded to CineMAX Banska Bystrica in January 2012. The brand became an ownership of VAV Invest again and should be used in Zvolen and Levice. Both cinema projects will have two screens, and the larger rooms will be used also for other cultural activities like concerts or theater performances. In Levice is also a three screen competitive project from Ster Century Cinemas planed.

CineMAX Banska Bystrica has 6 screens and a total capacity of 1,131 seats. The largest auditorium has 341 seats, the smallest 86 seats. Used digital video technologies were Christie projectors (CP2000 ZX), Doremi cinema servers (DCP 2000) and an XpanD-3D-system. The supplier of sound technologies was Dolby Labs (Dolby Digital EX, Dolby Digital and Dolby Surround). The digitalization of the Screen D was financially supported by the Slovak Audiovisual Fund with the sum of 23,000 Euros (about 30,000 US$) or about 21 per-cent of total costs.