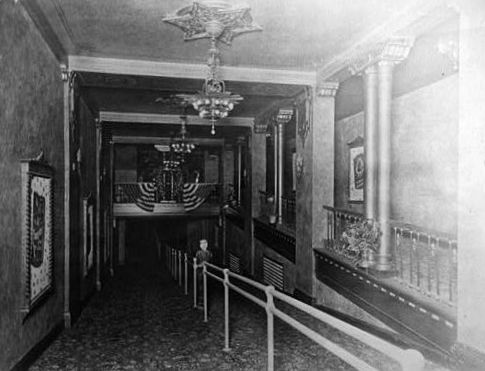 Opened on 21st November 1927, the Capitol Theatre was, at the time, one of the largest theatres built in Pennsylvania, seating over 2,700, and designed in ornate Spanish Colonial style, complete with elaborate plaster-work throughout the interior and a quasi-Art Deco style style facade, with terra cotta decoration.

The Capitol Theatre was also designed for sound movies, although it also had a stage for vaudeville and stage shows, including beauty pageants, held during its early decades of operation.

By the 1960’s, however, the once-grand Capitol Theatre had seen better days, and by the mid-1970’s, was shuttered. It was placed on the National Register of Historic Places in 1980.

A few years after closing, its roof collapsed, all but demolishing what remained of the interior. The Pennsylvania Historic Commission declared that the building had ‘lost its integrity’ due to severe deterioration and a city official declared the placing on the National Register was ‘a mistake’!

It was razed in August 1982, and replaced by a parking lot.

A Kimball organ was installed in this theater in 1927.

This information from sclave’s geocache page at:
View link

The CAPITOL THEATER of POTTSVILLE

The Capitol theater has earned the title of being the most gorgeous playhouse and movie theater in any city many times greater in size than POTSVILLE! The originator and builder of this magnificant and modern theater is the famous M.E. COMERFORD(You’ll find many theaters in this country built by him and his group) A gentleman born and raised in nearby HECKSCHERSVILLE valley and growing up near SCRANTON.
He became one of the greatest erectors of playhouses and theaters in the USA; and wanting to give back to the County of Schuylkill;where he was raised,a theater out of the ordinary!
He selected the county seat of POTSVILLE,as it’s locale and to be a monument to himself as it were and near his birthplace!
The CAPITOL THEATHER has a seating capcity of 2,700. It’s stage is very elaborately constructed with a proscenium opening 65ft wide and 26ft high(area in front of curtain)
The stage itself is 30ft wide by 80ft long and equipted with the most modern counterweight system of the time.
Opened sometime in 1927;It had a three story building,containing 13 dressing rooms and adjoing the stage area on both sides.
The main enterance to the capitol is made through a modern ramp leading to the orchestra floor and another leading to the mezzanine floor(balcony).The enterance being of pink Tennesee marble and elaborate art deco sides and ceilings,artisic to the highest degree! Beautiful poster panels and illuminated for up and coming shows and events! Chandeleirs copyed after the ones seen in the enterance of the Empire State Building.A vestible 16ft wide divides the outter lobby and coat room from the main enterance foyer,containg the two ramps,showing columns and piers of magnifcence!
Cosy mens smoking rooms,Ladies retiring rooms,the new fangled gizmo telephone boothes,drinking fountains and a soda fountain with concessionary court and the most comfortable furniture of effective design. And a hi-speed ventilation system in the warmer months also connected to the local steam heat plant for the colder months!
A $30,000.00 Grand Kimbal Organ with a console of the dissapearing kind connecting to a wonderful mechanism 60ft away!
The most uptodate projector system of one black & white soundless and the NEW color sound type;with four spot lights and a color wheel to give the curtain brilant flashing colors!
It started off with Vadaudville acts in the late 20’s and silent movies hence the Kimbal organ Then talkies and then the the color films in the 40’s! Also plays,concerts,the Philadephia philharmonic even played here as did top name rock concerts and comedy shows!The last theatrical show was for Pottsville Winter Carnival;the live Jackie Gleason show!
My first movie with my Dad was here-It was PATTON.
My Mom was a regular here on Saturday afternoons for the kids matinee,She remembers as a kid; vividly, the first color film of the 1940’s. It was THE WIZARD OF OZ…and when it changed to color everyone was dazzled and went WOW!!
Back in the 1950’s the city’s mayor gave kids something to do and budgeted a Saturday afternoon ever weekend in the summer! You Kids get in FREE if you bring a canned goods in for the poor!
I remember standing in line for 3 hours to see one of 3 MICKEY MOUSE CLUB shows one Saturday afternoon!
They made all the kids deputy sheriffs for the day;I still have my M.M. deputy’s badge!(see photo)

So all you cachers come and see our BEAUTIFUL CAPITOL THEATER in all it’s GRANDEUR!

Here is another undated image of the Capitol.

The architect that is listed here is William Harold Lee, but I’m fairly certain he only did the Modernization of the theater later on. I speculate that the original architect was Leon Lempert, Jr., who designed many of the Commerford theaters (of which this was originally).