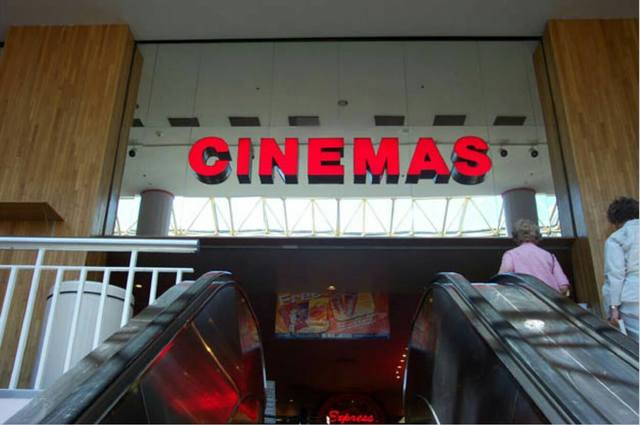 Crossgates Mall in Guilderland northwest of Albany, opened in 1984, and with it came Hoyts Cinema 10. The earliest advertisement available online for the theater states that it was equipped with 70mm projectors, ‘the most sophisticated’ Dolby Sound system, etc. Eventually, they added two screens.

The theater was located at the highest point of the mall, above Caldor, which was eventually replaced by Nobody Beats the Wiz and Best Buy. The mall featured a ‘glamorous modern’ (for 1984) wood paneled entrance with big, red, light up letters saying ‘CINEMAS’ at the top. Inside was a large lobby with a snack bar and a few video games. The usual tantalizing coming soon posters and displays lined the walls. At some point in the mid-1990s, they added Bulk Candy bins.

In the mid to late-1980’s and the 1990’s, Crossgates 12 was one of the most popular places in Albany to see mainstream Hollywood fare.

When the Regal 18 opened in 1998, it was said that Hoyts 12 would stay open to show second runs of mainstream films, more “alternative” fair (i.e. the independent film “Love! Valour! Compassion!”), and the occasional re-release (“Dirty Dancing” and “The Godfather” played there during their brief anniversary re-releases). The theater swiftly declined in popularity and, after a few years, was shut down.

Photos of both can be found on Cinematour.

I would be surprised if this theater was actually demolished. It is the third floor of the mall and the mall is still standing. You can still access the third floor public restrooms and see the entrance to the lobby.

When I say photos of both can be found at Cinematour, that means if you’re going to pull them off Cinematour, at least give us credit when you upload them here. ;)

Albany Business Journal is reporting that a Billy Beez children’s play center is planned for the space that once housed this theatre, which has been mothballed since Regal elected to go with one theatre in March 2005. I too would highly doubt given the high cost that would be involved that the theatre has been demolished (other than whatever Regal took with them). http://www.bizjournals.com/albany/morning_call/2015/12/billy-beez-childrens-fun-center-coming-crossgates.html