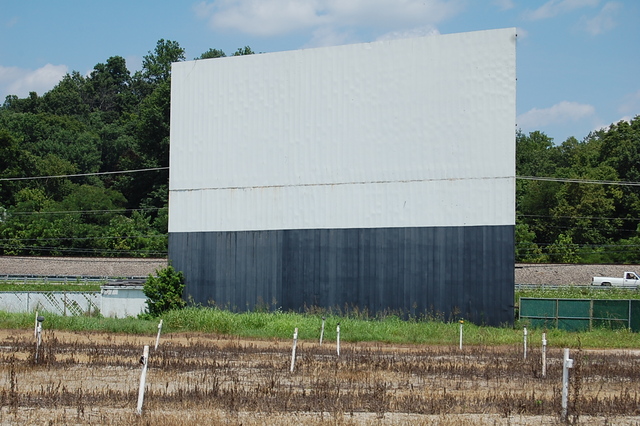 The Scioto Breeze Auto Theatre opened on August 1, 1949, featuring “Coroner Creek” with Randolph Scott. In addition to the movie, there were also news and cartoons clips. Admission to the movie was 50 cents. Raymond, Maurice, Eugene Lewis along with Harry M. Riddle opened the auto theatre on a nine acre parcel of land owned by Carl Schisler. It had a capacity of 400 cars, Autocrat in-a- car speakers, and Century Projection Equipment supplied by the Dayton Film Company. The screen tower was constructed with wood, which was common in the 1940’s drive-in theater screen construction. In the 1950’s, they had a stage where they presented musical acts and other shows. On September 29, 1952 a Jackie Teeters who was high pole artist fell 137 feet to her death.

On February 24, 1956, a strong wind gust blew down the original wooden screen tower. It was rebuilt with a steel and concrete screen tower. On May 24, 1963, that screen tower was blown down also. Work started in June 1963, to replace it with a new 158 ft. wide and 84 ft. tall Selby screen, at a cost of $24,000. The new screen tower has been rated to withstand wind gusts over 100 mph. In 1975, Chakeres Theatres Inc. from Springfield, Ohio, bought the Scioto Breeze Drive-In. Various improvements were made over the years, including a FM sound system in 1981 and it was twinned in 1986. The Scioto Breeze Drive-In finally closed in 2009. In the fall of 2018 the two screens and marquee are still standing.

Why the name Scioto Breeze?

Because it was just east of the Scioto River. Scioto is an Iroquois Indian word meaning “Deer.”

Is there a breeze(or wind) that blows accross the Scioto River?

Somewhere between 2011 and 2013 the Concession Stand/Projection Booth was demolished, but as of a June 2018 Street View both screens and the marquee are still standing.

The address for this theater is next to the church at 10073 US-23, Lucasville, OH 45648. The address above is incorrect. Screens and ramps are still visible.

this one could easily be reopened with some work!

A new projection booth/concession stand would have to be built along with installing new electrical services. Otherwise, some landscaping is needed along with screen maintenance if someone wanted to reopen it.