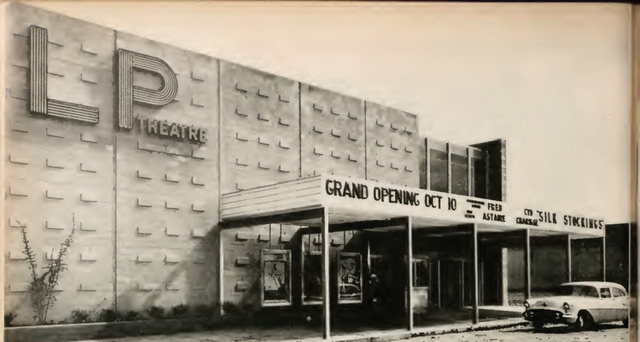 Located in the Lawrence Park Shopping Center. The Lawrence Park Theatre opened October 10, 1957 with Fred Astaire in “Silk Stockings”. It had 1,000 seats and a 42 feet wide screen. It was designed by architectural firm Thalheimer & Weitz, and operated by the Abel & Silber circuit. It was twinned on November 22, 1978, and was acquired by the Sameric Corp.

Movies which were screened here include “Popeye”, “Hardcore”, “Star Trek III”, “Project X”, “The Breakfast Club” and “Rumble Fish” to name but a few.

The Lawrence Park Eric Twin was closed on October 20, 1991. It was converted into a Barnes & Noble store.

Right across from barnes nobles formly LP theater was Movies Unlimited. I bought lots of movies there that you couldnt get anywhere else. They would special order stuff. I think they lasted until 2000 or 2001…

just got marquee letters from my friend steve his brother worked there so yet another piece of movie theatre lore these all need to be saved. so if theres any theatre closing near you salvage something

i forgot to mention the letters were from lawrence park twin

Actor Bruce Davison (X-Men, Willard, TV’s Harry & the Hendersons) was an usher at this theater in the late 1960s.

He told me so at a Monster Mania horror con in Jersey a few months ago.

A hopping theater in the ‘60s, Sound of Music, And It’s a Mad Mad Mad World, Were a few of the Matinees shown. Used to be a Toy Store next door W. T. Grant?

I saw the filmed version of the Royal Ballet production of Prokofiev’s “Romeo and Juliet” at the Lawrence Park Theatre on a Friday night in October 1966. It featured Rudolf Nureyev as Romeo and Margot Fonteyn as Juliet. It was one of the first instances of a ballet that was filmed for theatrical release. It was also my first date with a girl from Lansdowne-Aldan High School who will remain nameless. It was a night that I will never forget.

My Grandparents lived near there. I saw lots of movies there in the 70s & 80s. These three come to mind Alien, The Bad News Bears & Neighbors with Dan Aykroyd & John Belushi.