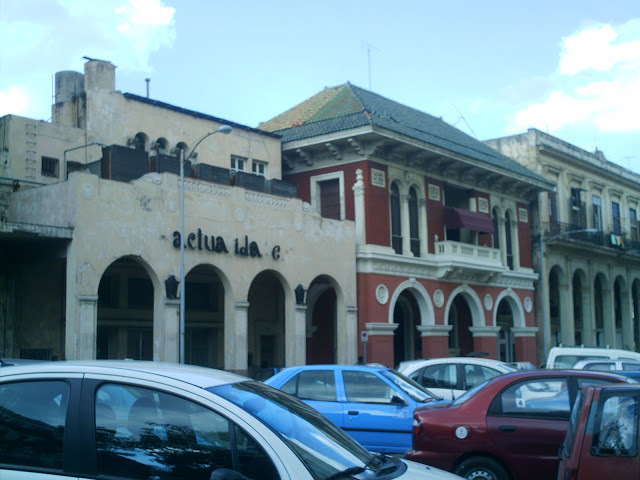 Located in the centre of Havana. The Cine Actualidades was opened on 18th April 1906. The entrance is protected by a columned portico.

This theater, located on Bélgica between Neptuno and Virtudes, opened in 1939; it was originally the property of Eusebio Azcue.

By chance I came across this site. Eusebio Azcue was grandfather to my mother. I am told he owned theaters in Havana and Mexico. He died in Mexico when MY grandmother was young. I’m thinking it would have been around 1913.

Although he had a son by the same name, I do not have knowledge of him owning theaters. He was an architect.

By my guess, the date of 1906 sounds correct. However, my parents and grandparents are all deceased. I should have asked for more specifics when they were living. However, I am thrilled to see a picture of the building and only wish that I had this information a couple of years ago when I visited Cuba.

Perhaps Guarina has additional info for me. I’d be very interested in knowing more.

Msivy, I’m sorry I didn’t see your comment before. I hadn’t visited the site much in the last year. I found the following in the May-Aug. 2014 issue of Arquitectura y Urbanismo: The first theater built for cinematographic exhibits in Havana was the Actualidades, opened on April 18, 1906 by impresario Eusebio Azcue, on Monserrate Street between Neptuno and Ánimas, which may be the oldest existing movie theater in Latin America. It has not been possible to document whether the construction lasting to the present was the one built at that early date, but there are photographs from the 20’s in which it appears as we know it, which evidences an age of at least over 80 years. In fact, it is the only surviving theater erected during the first quarter of the 20th Century in Havana. The cinematographic shows were part of a group of recreational activities which complemented each other. The April 18, 1906 edition of El Mundo newspaper when announcing the showing of movies at the Actualidades theater, added, “.…one feature will follow another: the monumental theater with its very powerful projector and its extraordinarily worthy pictures will be followed by the most famous Spanish and French dancers, the most renown couplet performers, the eccentrics, the ventriloquists…. all the world-wide varietés, all the (sic)lowest(??) genre.” It announces the first showing at 7:45 pm including “Les Miserables”, the second showing includes “The Black Rock Fairy”, the third, “Fire Falls”. Admission: Box: Two pesetas, Orchestra: One peseta, Balcony: Ten cents. The Albisu theater, later Campoamor, on Industria, belonged to Eusebio Azcue’s widow.