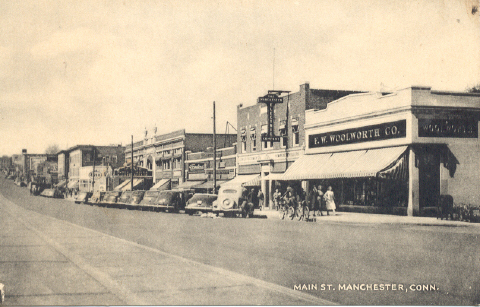 The State Theatre on Main Street in South Manchester was opened in June 1925. It was operated by Warner Bros. in the 1940’s. It was given a make-over in 1941.

It was sold to a church group in June 1974 and is now the Full Gospel Interdenominational church, which according to the marquee, is open 24 hours.

Does anyone have interior pictures of this old theater?

This old postcard shows the State in 1939 or so. The film on the marquee is “Love Affair” with Irene Dunne and Charles Boyer.

My grandfather (Jack Sanson) was the manager of the theater for many years. I’m sure I have many pictures of the theater in its heyday. His things are in storage, but next time I get a chance, I’ll look.

I stopped by last week while riding the nearby bike trail. It’s in the center of town. The large stage house and auditorium are very visible. I was exploring the back and the 2 “owners” asked what I was doing and I told them I was a theater architecture buff and I contributed to this site. They were happy to hear of it and invited me to see the place on a Sunday when they had services. There are pilasters on the side and the front and white and red brick. There were 4 sets of 2 windows across the front, in long arches. The side (of the lobby) and the front trim under the roof was decorative in red, white and blue. The auditorium is red brick and there’s one black metal staircase leading to a now, nonexistent door.

I enjoyed many wonderful hours of wide-eye excitement watching films at the State Theater in Manchester, Connecticut in the early and mid nineteen forties. The State was an elegant setting to enjoy a film, with thick carpeting, and comfortable seats. Jack Sanson was the manager, and he ran a tight ship.

The attitude of the audience was somewhat different in those days. It was common to have a “sing-a-long” as part of the bill, with the audience members following “the bouncing ball” on the screen as all joined together to sing some well known tune.

Many people got much of their news about the second world war from the news-reels. There were usually two films, a cartoon and the news on every show.

It was common for the audience to clap in appreciation, when a film ended.

For a time, there was a Frankenstein movie and a live Frankenstein show at midnight on Halloween night. The “monster” would revolt, rise from the operating table, would walk to the stairs at the one side of the stage, and begin to descend toward the audience. The masses would be screaming and those in the front rows clutched the armrests in fear. As the noise rose and the monster got closer, the lights would suddenly go out and all hell would break loose. The power of suggestion took over and the screams were deafening.

A child’s admission was $0.18 cents so if you had a quarter, you could get in plus buy a snack.

Seems like there was also a “State Theater” in Hartford, so it may have been a chain.

Those were wondrous years.

Here is a photo circa 1957 from the Manchester Historical Society:
http://tinyurl.com/4u9mp6

The Hartford Courant reported that the State was sold to a church group in June 1974.

There is a photo of the theater on the church site:
http://www.fgichurch.org/

The July 4, 1925, issue of The Moving Picture World noted the recent opening of the State Theatre:

“Morris Cuzzner, manager, opened the new State Theatre in South Manchester early in June. Vaudeville and pictures form the policy. The State cost $150,000 and it has a seating capacity of nearly 2,000.”