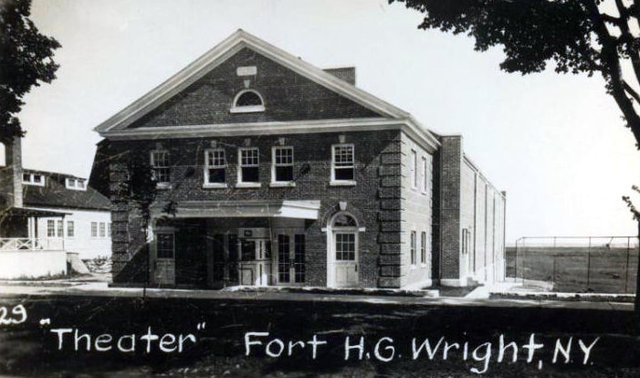 The Fort H.G. Wright Theatre was opened in 1932 under the United States Army Motion Picture Services.

Here is a picture of the theater now known as the Fisher’s Island Theatre: View link

The Friends of The Fishers Island Theatre is conducing a survey: http://www.surveymonkey.com/s/CFW6RP6

Friends of the Fishers Island Theater held a fundraising event at the Pequot on Thursday, July 12th, 2012. There was a DJ, great raffle prizes and golf-outing live auction good for the Calusa Pines golf club in Naples, Florida. There will be a $20 cover charge at the door.

Jamie Doucette reported that 2012 marks the 80th anniversary for the theater and “We are raising money for the theater which desperately needs painting, many building improvements and a new digital projector system. The film projector is very outdated and they are going to stop circulating movies on film in the near future. Digital will also allow us to get newer movies. The theater has already been cleaned numerous times by our committee and a professional cleaning company, the entry-way painted and the windows replaced.”

The theater opened in 1932. Among the features were the large projection booth, fireproof construction (the roof was processed steel), wall coverings designed to aid acoustics and a marquee.