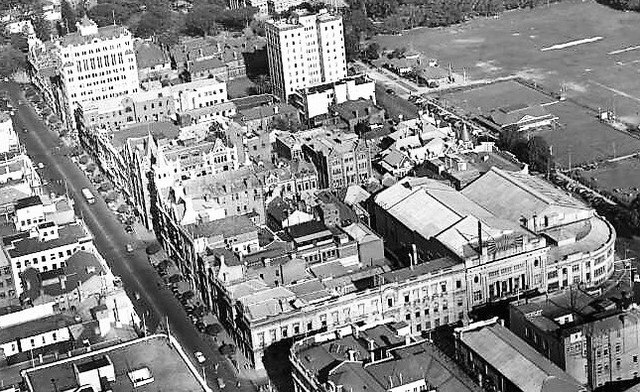 Designed by architects George Temple Poole and Christian Frederik Mouritzen, the Capitol Theatre opened on 4th May 1929 with Lewis Stone in “The Foreign Legion”. Seating was provided for 2,250, with 1,287 in the stalls and 963 in the circle. The theatre was not too successful as a cinema due to its size in a city with a small population and it had limited space backstage for operation as a live theatre.

Tom Wardle bought the Capitol Theatre in 1966 for use as a live theatre but sold it in 1968 after being offered a price above what he had purchased it for.

The Capitol Theatre was demolished in 1968 and replaced by an office building. The chandelier from the theatre now hangs in the Princess Theatre in Melbourne.

One of the many beautiful features of Perth’s Capitol Theatre was the magnificient art nouveau stencil work in the lounge foyer and the upper crush area, argually the finest such decoration in Australia at the time. Also notable in the lounge foyer was a bust of Rudolph Valentino, placed on an elegant plinth. Reputedly, Valentino’s lips were constantly red with the adoring but heartbroken kisses of his Perth fans. The bust is today part of the WA Performing Arts Museum collection at His Majesty’s Theatre.

The demolition of The Capitol rates as one of the major (of many) heritage crimes committed in Perth during the 1960s and 70s. Its principal designer, George Temple Poole, was WA’s greatest architect – and Western Australia’s premier architecture award is named in his honour. Ross Thorne in PICTURE PALACE ARCHITURE IN AUSTRALIA (Sun Books, 1976) states that Poole & Mouritzen “achieved a most remarkable design that should never been allowed to disappear … [its] decoration contained the essence of real art. The auditorium was a noble space, and the foyers and lounge lobbies were ingenious in decoration. Instead of moulded plaster, the architects decided to use paint. The flat wall, square column faces and ceiling panels were vividly decorated in patterns, panels and leafy murals” (p. 23).

As a live theatre, its stage was graced by some of the 20th century’s legendary performers, including Noel Coward, Vivien Leigh and Sir Lawrence Olivier.

CAPITOL THEATRE, PERTH – AERIAL VIEW (THE THEATRE IS NEAR THE BOTTOM RIGHT OF THE IMAGE)

Early photo of the magnificent Captitol

And what they replaced it with :(

The Capitol Theatre was next to the Embassy Ballroom(also demolished).

The Embassy Ballroom was on the top floor of Temple Court.

Back in July 2005, I partly quoted Ross Thorne’s commentary on Perth’s Capitol from PICTURE PALACE ARCHITURE IN AUSTRALIA (Sun Books, 1976). Here is Thorne’s full assessment: “The Capitol Theatre in Perth was an intriguing and distinctive cinema designed by architects Poole and Mouritzen. It followed the classical line with an extremely late art nouveau overlay. Unencumbered by the design policies of the big exhibitor companies, they achieved a most remarkable design that should never been allowed to disappear. Whereas most of the popular, voluptuously vulgar Spanish and atmospheric cinemas of the time can only be termed pop art, the decoration of this one contained the essence of real art. The auditorium was a noble space, and the foyers and lounge lobbies were ingenious in decoration. Instead of moulded plaster, the architects decided to use paint. The flat wall, square column faces and ceiling panels were vividly decorated in patterns, panels and leafy murals. The lounge foyer displays curvilinear patterns and stylized plant forms in an art nouveau style still struggling to escape from Victorian clutter.” (p. 23).