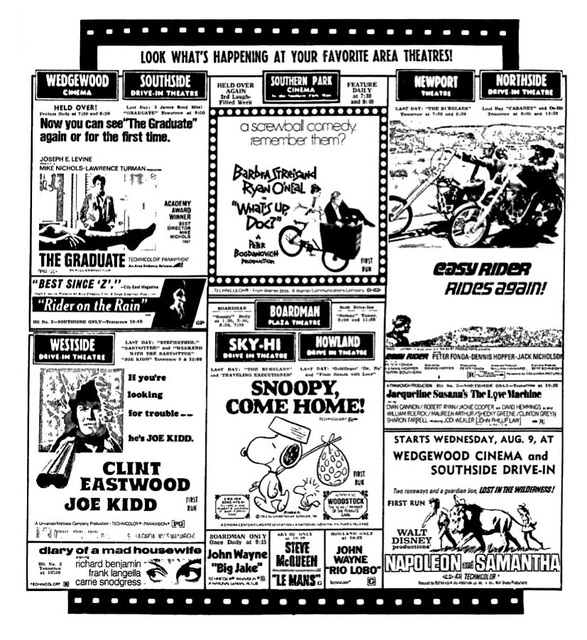 The Youngstown Drive-In opened July 25, 1947, showing “The Courage of Lassie” featuring Elizabeth Taylor, Frank Morgan and Tom Drake. It had a 750 car capacity. Eventually, it was renamed the Southside Drive-In, with the opening of the Northside Drive-In in April of 1948. It was owned by Peter Wellman from Girard, Ohio. Mr. Wellman also owned the Northside and Westside Drive-In’s. Peter Wellman was a well-known golfer, business man and theatre owner in the Youngstown, Ohio area. In 1950, Associated Drive-In Theatres signed a long term lease with Wellman to operate the Southside, Northside and Westside Drive-In theatres. Wellman continued to operate his own neighborhood indoor theatres.

In March of 1964, Youngstown Enterprises Inc. was formed by Blair Mooney (Co-Operative Theaters of Ohio) along with Carl Kesler from Youngstown, Ohio. They took over the leases for the Southside, Northside and Westside Drive-In’s from Associated Threatres. Youngstown Enterprises Inc. operated all four of the Youngstown area drive-in’s, along with the Sky-Hi Drive-In, up to their closing. In 1969 Wellman Theatres were no more. After Peter’s death, his sons decided to get out of the theatre operating business and leased all there indoor theatres to Mooney. At the end of the 1984 summer movie season, the Southside Drive-In was closed for good. The property was redeveloped into residential housing and a Toyota car dealership.

The correct address is 8250 Market Street.