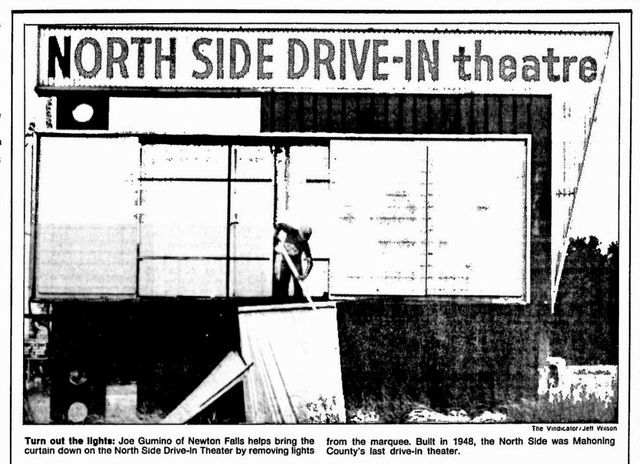 In March of 1964, Youngstown Enterprises Inc. was formed by Blair Mooney (Co-Operative Theatres of Ohio) along with Carl Kesler from Youngstown, Ohio. They took over the leases for Southside, Northside and Westside Drive-In’s from Associated Theatres. Along with the Ski-Hi Drive-In, Youngstown Enterprises was operating all four Youngstown area drive-in’s until they closed. In 1969, Wellman Theatres ceased doing business. After Peter’s death, his sons decided to get out of the theatre operating business and leased all there indoor theatres to Mooney.

At the end of the 1989 summer movie season, the Northside Drive-In was closed for good. On November 11, 1989, the concessions stand along with the projectors, office and maintenance equipment was set on fire and destroyed, causing $75,000.00 of damage. In June of 1990, the drive-in was demolished and the property is now owned by Todd Homestead Cemetery Association. This property is sitting empty except for a Walgreens Drug Store on the corner. The Northside Drive-In was the last drive-in theatre built by Peter Wellman to close.

The Northside DRIVE-In was not far from the Belmont Theater on the North Side.

Was the fire arson?

Big old pine tree and a circle of smaller shrubs that appear to be present in a 1970 Historic Aerial are still there to this day.