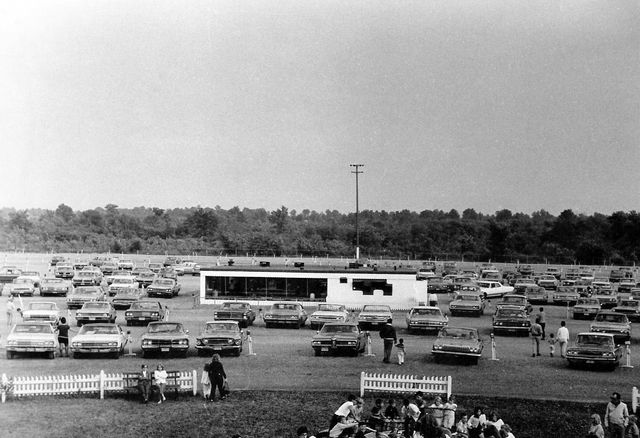 Located in Lowellville, to the east of Youngstown, OH. The Sky-Hi Drive-In opened August 22, 1947, featuring “Carnival in Costa Rica” with Dick Haynes, Celeste Holm and Cesar Romero. Highway Theatres Inc. was the owner while Blair Mooney (Co-Operative Theatres of Ohio) was the operator of the drive-in. The car capacity was 620, with screening features on a 50 ft. wide screen tower. In 1954, a new entrance and marquee storage building was constructed. Witt Electric Co. installed 600 new in car heaters at The Sky-Hi, with their operation starting on October 17, 1957. This was the only drive-in theatre in Youngstown, Ohio to have these heaters, which allowed them to remain open all year long. The heaters were attached to the speaker posts and are mounted to the cars as are the RCA in-a-car speakers. During the winter, the Sky-Hi Drive-In only operated during the weekends. They stopped operating during the winter at the end of 1977. On the first of April, the drive-in returned to a seven day a week schedule. The schedule allowed the showing of two features Sunday through Thursday and three on Fridays and Saturdays.

In March of 1964, Youngstown Enterprises Inc. was formed by Blair Mooney (Co-Operative Theatres of Ohio) along with Carl Kesler from Youngstown, Ohio. They took over the leases of the Southside, Northside and Westside Drive-In’s which were owned by Peter Wellman. Youngstown Enterprises now operates the Sky-Hi, Southside, Northside and Westside Drive-In’s. The drive-in had a playground located in front of the screen tower for the kids, along with a glass front concession stand, so the customers could still watch the movie while being waited on. In 1967, the Marlon Heights and Lowellville Methodist Churches started holding drive-in services at the drive-in.

That was my question also? The drive-in was located in Coitsville Township. There is no city of Coitsville and the street address is: Lowellville, Ohio. It will map out to both Coitsville or Lowellville.

Many thanks for posting this Drive-in. Today there is a Mega Church on the land that the Sky-Hi was located.