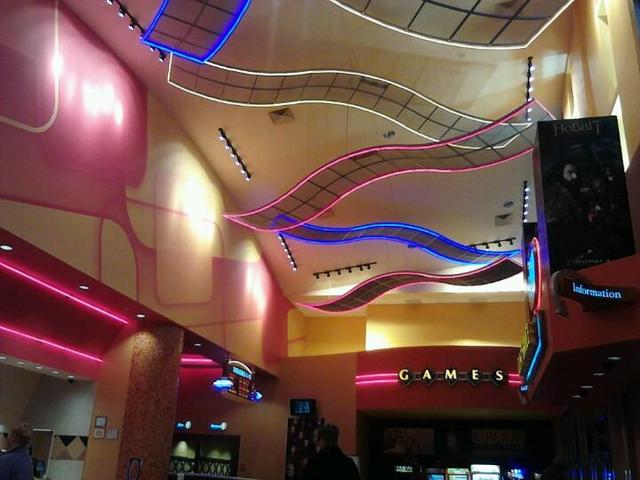 Regal Waugh Chapel Stadium 12 & IMAX was opened on September 14, 2012. The theatre is located at Waugh Chapel Towne Centre in Gambrills, MD and features stadium seating and digital projection in all auditoriums.

Auditorium 6 is a large-format IMAX auditorium.

Crofton Patch (includes a photo of the theatre):

This theatre is part of the ongoing development of Waugh Chapel Towne Centre. As a result, the theatre’s exact location does not appear on any digital maps as of this writing.

I saw The Hunger Games in IMAX during one of the preview days. The IMAX screen size is a bit underwhelming for a purpose-built IMAX auditorium (auditorium 6). The stadium seating in this auditorium was built at a steeper rake and on a raised platform. I have not seen the other standard auditoriums in the theatre so I do not know if they were also built this way. Seating capacities are posted at auditorium entrances.

did you get any sense of the dimensions (size) of the IMAX screen? Management was clueless to this fact. He also was vague if any auditoriums could playback 7.1 audio.

Giles, I expected the IMAX screen to at least be as large as the XD screen at Cinemark Egyptian 24. That is not the case. It looked similar in size to most of the other IMAX retrofits in the area, except the IMAX screens at the Regal Majestic 20 and AMC Tysons Corner, which are most likely larger.

I won’t see an IMAX feature over at the Majestic due to the expensive ticket price (and the fact that they don’t discount it to matinee prices). My fave is definitely Tysons, with one of the largest IMAX-Digital screens I’ve seen (and enjoyed). For a new theater and specifically a new IMAX-Digital auditorium, not to be as large (or larger) than the XD screen at the Egyptian is baffling. (I can’t stand the screen sizes of the IMAX-D screens at Columbia Mall or the Rio)

I thought I had entries here..maybe not. My posse and I saw last year’s Star Trek: Into Darkness in the IMAX auditorium. Its probably one of the smallest of the IMAX-lite installs in the area. And Giles, yes, its smaller then the Egyptian’s XD. Its a shame since this venue was built new from the ground up. My friends were upset for paying $18 for the privilege. I recall the day seeing Star Trek, as it was playing in another auditorium and sold out, people refusing to pay the extra $ to see it in IMAX and instead choosing to see other movies. I’m thinking either folks don’t know/appreciate the difference, or just don’t care. Then again, as ticket prices approach $20, you have to think about what you are spending and what you get for that money.

I think I saw the last GI Joe movie here, too..and Spielberg’s Lincoln in one of the regular auditoriums. ‘Lincoln’, the experience was underwhelming as the sound level was too low that lulled me to sleep..literally, although Daniel Day Lewis performance was great.

They’ve got hot food here such as wings and jalapeno poppers, with soda, close to $12 or more. Expensive! I’d rather (and have) snuck in better food from the nearby Wegmans' hot food bar.

The customer service with the management, at least, is good. I had an issue with my Regal card and they took my old one and transferred everything to my new card, with pick up the next day.

I caught the 40th anniversary release of Star Trek: The Motion Picture in #3 this week. This was not my first venue choice as I thought either Cinemark Egyptian or the AMC Tysons had a larger screen judging by the seating charts. Unfortunately, it was the closest venue and the last show time for the event.

This wasn’t the the same auditorium as the one I saw Spielberg’s ‘Lincoln’ back in ‘12 or '13 but the screen was rather large from ceiling to floor but not scope wide for Star Trek. There were more people here for the weekday showing than I had anticipated.

The picture was cropped and to my surprise, was a digital copy of probably the master they used for the VHS release way back when. Colors looked tv faded. I can say this with certainty because the translation font used was the soft rounded one in the video release and NOT the TMP font in the theatrical release. Also, some of the visuals were slightly panned! I haven’t seen the Blu Ray version but I’m thinking the Blu Ray would’ve looked/sound much better than this one.

I came in with the preshow movie retrospective already midway through. I first thought it was a rehash of the 2K1 Director’s Edition but the copyright has 2009 stamp. Hmmm.

Sound was very good. The rear speakers came alive at least during the Vger reveal. Jerry Goldsmith’s score especially the use of the blaster beam delivered that theatrical resonance that made this movie positively memorable. Although, it does not surpass my original experience way back when the movie came out.

Let’s hope Paramount does a proper 4K cut on this film, as they’ve done releases on far lesser movies.

I noticed Regal has an unlimited $21/month movie membership offer. This is not unreasonable given one can easily recoup the cost after 2 evening shows.