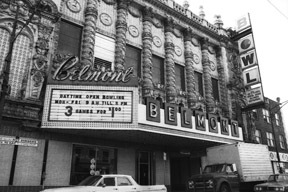 The Belmont Theater was one of the more popular North Side Chicago movie houses, as it was surrounded by a bustling retail hub and located close to public transportation near the intersection of W. Belmont Avenue, Ashland Avenue and N. Lincoln Avenue in the Lake View neighborhood.

The Belmont Theater opened on September 13, 1926 with Thomas Meighan in “Tin Gods” plus on the stage Art Khan in “Hello Spain”. Built for the Lubliner & Trinz circuit it was taken over by the Balaban & Katz chain in May of 1930. The Belmont Theater was designed by W.W. Ahlschlager, who was also the architect of the Roxy Theatre and Beacon Theatre in New York City. This 3,200-plus seat palace was equipped with a Wurlitzer 4 manual, 20 ranks organ which was opened by organist Preston H. Sellers Jr. Originally a venue for both live entertainment and movies, it later turned to movies only.

In the mid-1960’s, the movie house was converted into a bowling alley, which it remained until closing in the mid-1980’s.

In 1996, with the revival of the Lakeview neighborhood in full swing, a mixed condominium and retail complex was built on the site of the Belmont Theater, which was demolished except for its Spanish Baroque style terra-cotta facade.

AH HA!! I knew that building used to be a theatre! I could tell by the look of it. I can feel the vibes of a movie palace :)
My friend told me “You got theatres on the brain! Anyone can see that was just a decorative old hotel…” HAHA He owes me an apology. :)

In the late `80’s, the one time sign for an old club called The Phoenix, sat propped up in the doorway of the shuttered Belmont Theatre.
The Phoenix was a giant bar/club on Broadway between Diversey & Surf. Where Marshall’s and all that is now.
It was a deviously large building once you were indoors. It had bars that connected to other bars in endless rooms. And an even larger auditorium like room in the very back. They had different bands in different rooms.
Often Reggae was a standard in one of them. I was there as late as 1982 as I recall. If anyone knows if this was possibly originally a theatre itself, please pass it along. It was on the West side of Broadway, next to a gas station at Surf & Broadway. Across from Round Records, Ranatti’s & once a Ponderosa where the Walgreens is at Diversey & Broadway.(I remember that all burned in the winter of 1976. Years before the film “Backdraft”, the fire dept. hoses encased a VW in ice, that was illegally parked in front of the hydrant)

There was also a bar called Gaffers on the East side of Broadway, that had windows that opened to the street. They were one of the first bars to utilize sodium vapor lights on their own facade. So it was a visible bright orange from a block away. The city had only then recently converted to SV lamps for the city street lamps. From the old white-ish/green-ish ones. Critics claimed the new SV street lamps caused the trees to continuously grow even at night.

This is getting off-topic, and probably better suited for the Century page, but the Phoenix was known as the Paradise Chicago after 1982, and was said to hold over 1500 dancers at 25,000 sq ft. Before the phoenix closed, it was Country & Western for a while. It had opened in 1975. Before that, it was Ski’s Lounge, Thumbs Up, and Poppy’s, and after the Paradise it closed from 1985-87, became the Phoenix again (ironically enough), Paramore, Chaplin’s Comedy Club (a 600 seat comedy club for about a month in 1991), and Noa Noa. The big room was a converted garage. In 1996 it was all torn down for the large retail and parking garage on the site; initially 16 General Cinemas screens were in this plan, but neighborhood opposition killed it.

Wow, what a great photo on the homepage of the Belmont Theater. It looks like the marquee (obviously a later modernized one) remained into its era as a bowling alley.

On another note, how was the theater converted into a bowling alley?

I went to Belmont Bowl a couple of times when I was in grade school. If I recall correctly, the bowling alley was not on the main floor.

Great photos of the Belmont here:

In answer to Paul’s question from a few years ago: I saw a picture of the bowling alley interior some years ago. I think it was on two levels, because the photo I saw showed lanes at balcony level underneath the old theater ceiling. I would assume they left the balcony structure in place because it would have been a huge undertaking to remove the trusses and all that cement.

Here’s a comment on a bowling history web site that backs up the two level concept:

They may have installed drop ceilings in later years, because one of the comments in this thread makes it sound like they “discovered” parts of the theater interior during demolition.