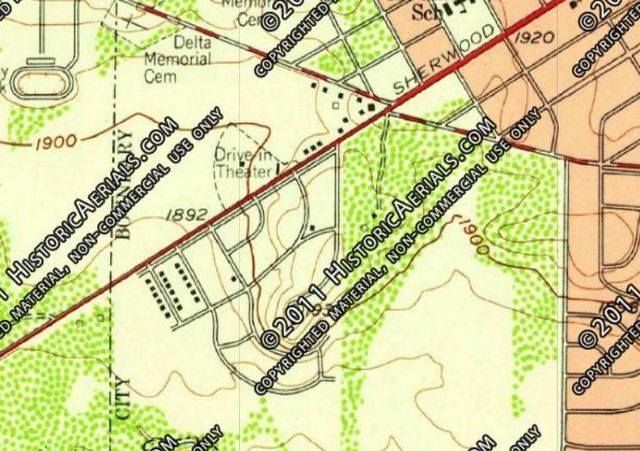 Regarding the Starlite Drive-in Theater in San Angelo, TX: There was a drive-in theater at the intersection of what was then US 87 (now FM 1223) and the Old Christoval Road on the south edge of town. It was demolished in the early-to-mid 1960’s to make room for a mobile home park which I believe is still there. The theater was named Starlite, or Twilight, or something like that. I think I do remember seeing an old drive-in theater screen off Sherwood Way at the location you specified (near the old city incenerator), but I never heard its name since it was closed. One other item: When I lived in San Angelo in the 1960’s I was organist for Trinity Methodist Church, whose original Wicks pipe organ had come out of the Texas Theater downtown. By the time I played there, that organ had been removed from the church (in 1954) and a new Wicks had been installed; however, the newer Wicks utilized several ranks of pipes from the old Texas Theater Wicks that had been in the church. I understand that one other San Angelo theater had a Wicks pipe organ. Does anyone know which theater that was?

Is this the Drive-in that had the aligator at the entrance? My grandfather told me about a “Twilight” drive in that had an aligator at the entrance. But he also mentioned a “Stardust”. The “Stardust”, he said, was torn down and made into a trailer park, named the stardust as well. And they moved the drive in to another location in San Angelo. So im confused now, hehe, Ive been told about “Twilight” and “Stardust”, but not Starlite. Got to bother my grandfather again about this drive in.

Rick Smith, columnist for the San Angelo Standard-Times, wrote in 2009 that the Starlite opened in 1949 at “Mertzon Highway and Arden Road (where NAPA Auto Parts is now).”

The address of that NAPA store is 3201 Arden Rd, but the topo map suggests a better match might be the adjacent Walgreens at 3328 Sherwood Way.

Well, Rick Smith may be wrong.

That is the location of the Jet Drive-In, which also opened around that time.

It seems that the Starlite Drive-In was located at the corner of S Chadbourne St & Christoval Rd, San Angelo, TX. as indicated by an earlier post. The entrance and exit to the drive-in took up the entire corner, but that is now gone.

Today, a trailer park sits in that location with no trace of the drive-in remaining.

All I know is what I read. Rick Smith’s column, which accounted for every drive-in in CT’s San Angelo database, listed the Twilight as the drive-in at Chadbourne & Christoval and said that the Jet was at “3506 Sherwood Way (where the Angelo Bible Church is now).”

In a thoroughly remarkable coincidence, Alana Elgin of the San Angelo Standard-Times wrote an updated drive-in list article just yesterday. Elgin wrote that the Jet was at 112 W 29th St. and later became the Twin Vue, the Twilite was “on Christoval Road near US Highway 87 South”, and that the Starlite “was on the Mertzon highway at Arden Road.” It opened in 1950, was sold in 1953 and closed in 1954.

There seems to be some disagreement, at least with those writing the history of the drive-ins in San Angelo.

First off, there is an ad of the Jet Drive-In that lists the location as “Mertzon HWY” which is now Sherwood Way. Yet Elgin lists the Starlite in that location.

A 1953 aerial shows a drive-in at Mertzon HWY and another single screen drive-in at what today is W 25th and Stardust Street. A trailer park now sits partly on the old drive-in location, although the roads in the area have changed considerably.

Seems to me that the Jet was the single screen drive-in at “Mertzon highway at Arden Road”. While the Starlite was at W 25th and Stardust. The Starlite may have been taken out by HWY 87 or N Bryant Blvd which now runs through part of the property.

A twin drive-in appears a few blocks away at 900 W 29th where Freedom Mini-Storage now sits.

It won’t help us figure out its location, but the June 4, 1949 issue of BoxOffice had a great origin story for the Starlite:

R. S. Starling, a gasoline distributor and retailer of San Angelo, Tex., says he got into the drive-in business by accident. It happened like this:

About five years ago, in an attempt to sell more gasoline he put up a big screen on the back roof of one of his filling stations and gave purchasers of five gallons of gas a free ticket to the show. The idea clicked. Cars came in droves; filling station attendants couldn’t even get to the pumps.

The oil man decided there must be something to the drive-in business. He started enhancing and improving the place, called it the Twilite Drive-In and charged a regular admission. Gas sales continued to boom as a result of many cars on the lot.

As materials eased up and costs leveled off, Starling was set to put in a real drive-in and the Starlite was the result. He has since also enlarged and improved his Twilite Drive-In.

More Starling hijinks reported by the March 29, 1950 issue of the Odessa (TX) American:

A jury fined R. S. Starling, owner of the Starlite drive-in, $25 a day for the two days the picture was shown. He was fined for not having a censor board permit to show the film. Ava Smith, county probation officers and a censor board member, ruled the film was not to be shown.