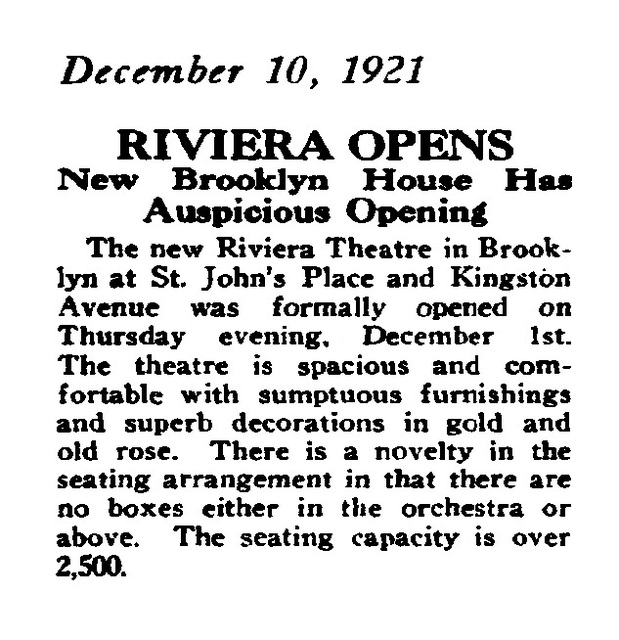 Located on St. John’s Place and Kingston Avenue. The Riviera Theatre opened on December 1, 1921 with Betty Compson in “Ladies Who Do” on the screen and a program of B.F. Keith Vaudeville Seating 2,292 it was designed by architect Eugene DeRosa and was equipped with a Kimball 3 manual organ. In 1922 and until 1927 it was renamed Rivera Theater offering B.F. Keith Vaudeville.

On November 7, 1928 it was taken over by Louis F. Werba and renamed Werba’s Rivera Theatre, presenting the Rivera Players repertory company in the play “Yellow”. The Rivera Players were in the theatre until 1928.

On September 23m, 1928, after alterations to the balcony to the plans of architect H.A. Yanick, it opened as a playhouse with Irene Douglas & John Lott in “LuLu Belle” and became the Rivera Theatre once again. The seating capacity was slightly reduced to 2,229. In August 1929 it was leased to Fox-Metropolitan Theatres chain and was equipped with ‘talkie’ equipment to become a movie theatre. It was later operated by Randforce Amusement Corp. and closed in 1953.

Was this theatre the Riviera? I remember it as the Rivera but I may have pronunced it improperly.

I lived at 1143 St Johns Place and remember seeing shows (I think a circus) as well as some movies at the RIvera circa 1949 or 1950.
I think it eventually became a storage place for moving vans and then an A & P.
EF

The 1924 Brooklyn Eagle Almanac has it as a B.F. Keith’s Theater in a quarter page ad.